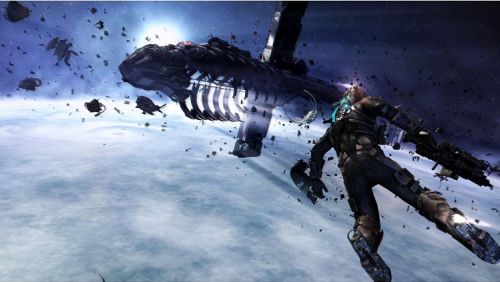 We didn't get to play Dead Space 3 at E3, but we did get to watch a pretty sweet video. As I mentioned in our preview, we got to see the main character, Issac, interact with NPC/potential co-op partner Carver in both single player and cooperative play. EA and Visceral Games were quick to point out that the co-op would not affect the honorific atmosphere the Dead Space franchise is known for. Don't take their word for it, you can see for yourself in the video below:

The preceding is most of what we saw at the EA booth at E3 (minus a few grisly deaths). I think Dead Space 3 looks great, for a Lost Planet game. I even started calling it "Lost Space" during our last podcast. Whoops.

Steve Papoutsis says the game will still be scary if you go it alone. I hope so. It looked like a shooting gallery once Carver came into play. Don't get me wrong, I think the game looks great. I just won't be playing it for a horror vibe. Of course, I'll be playing co-op.

Dead Space 3 supports two player online co-op. It will launch early next year on the Xbox 360, PlayStation 3 and PC.