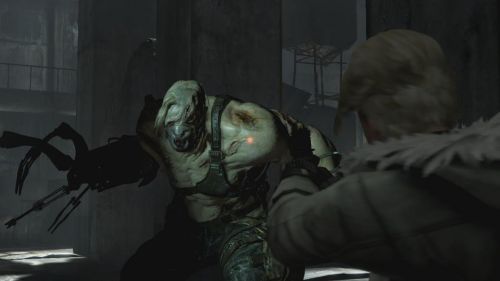 Dragon's Dogma owners have something to crow about today. If you have the Xbox 360 version of Capcom's fantasy title you can now download the Resident Evil 6 demo through Xbox LIVE. Judging by the press release, this demo will include the three separate campaign missions that were on display at last month's E3. Chris Redfield, Leon Kennedy, and Jake Muller each face threats from Umbrella in three vastly different locations across the globe. Unfortunately, you'll have to go it alone. The demo doesn't support co-op. UPDATE: It appears the demo DOES support online co-op. Awesome! If it supports offline co-op, drop us a line, and I'll update again.

Locke and I stormed through two of the campaigns at E3, where it was playable cooperatively. We liked the game well enough to nominate it for the Co-Optimus Game of Show. You can see our impressions here. We've also got footage of Leon's slow and spooky campaign as well as Jake's action-oriented adventure. Chris rounds out the three scenarios with a mission that feels like a third person military shooter. It's an intense gameplay experience.

Don't take my word for it. Now you can play all three campaigns on your own, so long as you have a copy of Dragon's Dogma with an unclaimed download code. Play the demo and let us know what you think.