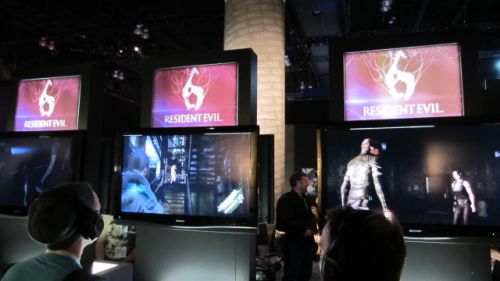 Resident Evil 6 had the largest presence in the Capcom booth. After swooning over the new design of Dante in Devil May Cry and checking out the big mech in Lost Planet 3, Locke and I had the opportunity to dig right into some two player co-op. Resident Evil 6 boasts three separate campaigns and we were able to sample two of them.

The Resident Evil fanbase has long been divided into two groups, those who hate Leon Kennedy, and horrible human beings. Two lesser-known factions are the old school, tank controls = survival horror players, and the newer, action-oriented, over-the-shoulder fans. The core  games have always sold well, so if anyone has any real misgivings, they’re speaking with their keyboards and not their wallets. So who cares?

Capcom does, apparently. Locke and I managed to get our grubby little mitts on two Resident Evil 6 co-op missions. The first featured Chris Redfield and newcomer Piers Nivans, the other starred Leon Kennedy and Helena Harper. I can comfortably say these missions felt like we were playing two entirely different games, each geared toward a different fanbase. A third campaign follows the story of Jake Muller (Wesker’s son), and Sherry Birkin, but E3 time constraints kept us from indulging.

Chris and Piers’ mission begins with a bang. Resident Evil 6 bares its high-octane teeth in this scenario. Gameplay felt more like a third person military shooter than a survival horror title. Actually, it played exactly like a military shooter. I finally remembered we were playing a Resident Evil game when enemies started violently mutating into hellish flying creatures instead of dropping dead like good little terrorists.

We battled several infected human soldiers armed with an assortment of weapons across cluttered city rooftops. We were quick to notice the slick UI and the dynamic character movement. We could slide in and out of cover with ease. The demo wouldn’t allow me to invert my controls, so I whipped out my trusty knife and went to work in CQC. I was stunned to discover that the melee combat did not suck. It isn’t incredible, but it’s effective, and it looks pretty cool.

As we played through the demo certain RE reminders eventually popped up. The ever-present green herbs made an appearance, and game began to “feel” right. It’s been awhile since I’ve played Resident Evil 5, but from what I remember the controls were a bit cumbersome when the gameplay got chaotic. RE6’s controls are better suited for an action game. Yes, you can move and shoot! After we finished up the Chris and Piers mission we moved on to Leon and Helena’s level. Not only did our HUD change, we found ourselves in what appeared to be a different game altogether... While my partner has described the Chris and Pierce campaign above I will take you through my thoughts on Leon and Helena’s campaign.

The demo had Leon and Helena trapped in a dark abandoned civic building, searching for survivors of the outbreak. Of the two campaigns, this was by far the more mysterious and evocative style that you would find in Resident Evil 2 or 4. The emphasis was definitely on mood as there was not single enemy throughout the entire demo. It was a powerful experience and I sharing it with a friend was something that I had never seen in a Resident Evil game, let alone a horror game at all.  Taking a step back from the overly aggressive Chris and Pierce campaign and allowing the player to explore was a great move by Capcom and I loved every minute of it. We eventually met up with a man who was looking for his daughter in the same building us being the ones with handguns,  joined him in this plight to find his lost child. I won’t spoil any more of what happened in that building but all I can tell you is that horror fans and old school Resident Evil players will eat this up.

I went into the demo with expecting something similar to Resident Evil 5, but the Leon and Helena campaign demonstrated that Capcom can still made an enthralling survival horror game and a great co-op experience to boot.

We also had a chance to chat with a Capcom representative who explained how the three campaigns in Resident Evil 6 will intertwine with each other throughout the game. Even though the demo levels were entirely two player co-op, he mentioned that there will be a chance for four player co-op when the teams meet up in the story.

When characters cross paths, other players from other networked RE6 games may take control of your fellow main characters. Players will be able to choose if they want to allow players to enter their game or not. While it was NOT explained to us in detail, I would assume that it will be similar to how co-op functioned in Dead Rising 2. If you leave your game “open,” other players can join you at any time. If you set your game to “private,” you can either invite friends or use AI controlled partners.

This worked well for DR2, but the difference in that game is that you didn’t have to rely on AI to complete a mission, since everything was based on the single player game. You did have to rely on the CPU in another Capcom co-op title: Lost Planet 2, and that had mixed results. I fully expect a hybrid co-op version of those two games. We’ll have to wait until fall to see how successful the story crossover portions are. Right now I’d recommend having a solid co-op partner, with a spare or two on deck.

The two campaign missions we played through will appeal to both old school survival horror fans and action-oriented newcomers alike. Will Capcom’s three-pronged approach to co-op be successful? We’ll find out this fall.

Resident Evil 6 will support two player local co-op and four player online co-op. It will launch on the 360, PS3 and PC on October 2nd.