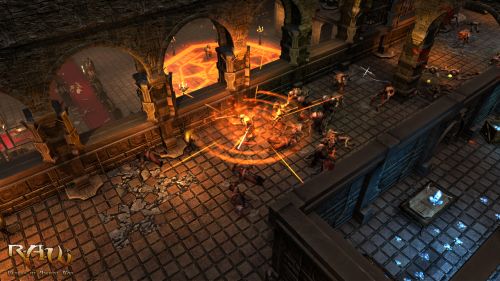 I've been missing out on Realms of Ancient War news. When I caught this video I was pleasantly surprised. It covers your basic ARPG elements: setting, classes, loot, and co-op. I don't know, something about the visuals is "doing it" for me. Maybe it's all the nice area of effect spells and powers that radiate from the characters throughout the video. I do enjoy swatting several flies at once.

R.A.W. looks like your standard ARPG. Kill up all the baddies, collect your loot, level up, and be on your way. If it's done well, it's awesome, if it's done poorly, it's forgotten. It does have a cool feature that allows players to take control of the more powerful enemies once they've been weakened in battle. The overview video is promising:

Realms of Ancient War supports two player local co-op. Not ideal, but that should work for the couch crowd. It has a $10 price point and is scheduled for a September release on the Xbox Live Arcade, PlayStation Network and PC. You can see more R.A.W. coverage from E3 2012 right here.