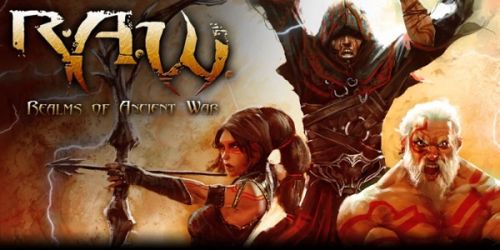 Who is the Ultimate Warrior?  For many it will be the former WWF star with that namesake.  However, in my opinion a truly powerful fighter is unlikely to be covered in tassels and face paint, whooping at his enemies. Give me the Barbarian from Golden Axe any day.  The Warrior character in Realms of Ancient War (RAW) follows in these barbarian footsteps.  A new trailer highlights his belief that what you can't say with flowers, say with a sword.  Check out the trailer for some in game footage of this 2 player local drop in co-op dungeon crawler, due some time later this year on PSN and XBLA.  It is certainly looking like potentially one of the best the genre has to offer.

RAW is already looking like a sweet downloadable title; a cross between Lara Croft, Diablo and a swarm of enemies.  The new video shows the Warrior in combat, but what about the man himself?  Focus Interactive have provided a little biog of the person inside the rippling biceps:

Courageous, hot-headed and expert in close combat, the Warrior thrives at the very heart of the battle. Swinging his dual blades with power and speed, his powerful melee attacks are devastating, sometimes allowing him to strike down dozens of enemies at once! And when his health goes bad, bloody rage embraces him and make him even more powerful, more resilient, enabling him to cause even more damage…

Now that you understand the person, check out the ultra-violence in the video: