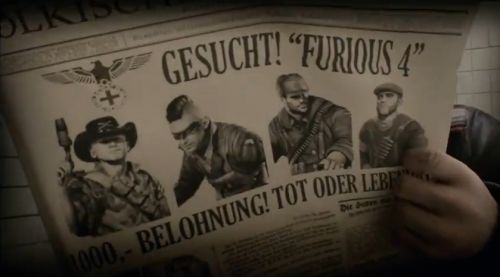 Gearbox's other four player cooperative title, Brothers in Arm: Furious 4, was notably absent from this year's E3. The studio's head honcho and co-op aficionado, Randy Pitchford, recently told CVG "the game has evolved." He wouldn't say what the game had evolved into... I'm hoping dinosaurs, because, well, WWII-era Nazi-eating T-Rex's would be a glorious thing. But that seems unlikely.

Pitchford went on to say:

I think people are going to be surprised by what they'll see, and it's still evolving. One of the reasons why we're not talking about it now is that it's evolving and we need to make further changes before we can start talking about it.

He also mentioned the fact that the studio has two highly anticipated co-op titles coming out over the next few months. Borderlands 2 launches in September and Aliens: Colonial Marines is expected to hit store shelves in February. In case you missed it.

We may not know what BIA: F4 has evolved into, but we can show you what it has evolved from. Yes, I'm using this as an excuse to re-post the ridiculous 2011 announcement trailer. Obviously, the game will not be out in 2012. Warning: You are about to see some ultraviolent Nazi abuse:

We're not sure if Brothers in Arms: Furious 4 still supports co-op, but since Pitchford continues to call it "Furious Four," we'll go out on a limb and say that it does. For now. No word on a release date. We do expect to hear more after the Borderlands 2 launch this fall.