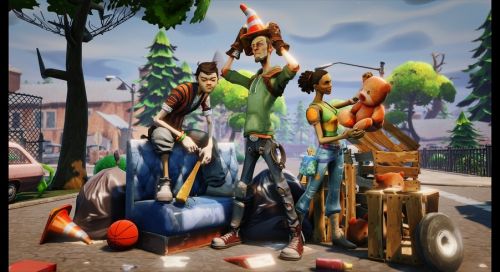 After waiting a long while to hear some news on Epic Game’s announced title, Fortnight, Epic Games producer, Tanya Jessen (along with Cliff Bleszinski) have unveiled some sweet details regarding their new, sandbox survival title to the fans over at Comic-Con.

This being the first game to use their next-gen, Unreal Engine 4 technology, Epic Games aims to make Fornite one of the most exhilarating co-op sandbox survival experiences out there. The new Unreal Engine tech allows for the game’s cartoonish feel to be taken to the next level, displaying beautiful lighting and simply stunning character modeling. According to Jessen, Fortnite is a game all about exploration, scavenging, fortification construction, and fighting wave after wave of nocturnal beasts looking for blood.

"Building is really the core of the game," Jessen says to the crowd, "Everything you find allows you to build and improve your structure." During the demonstration at the convention, Epic Games showed off a playable prototype of the game running on the current Unreal Engine 3. It displayed players have dozens of ways to upgrade their weaponry, such as explosive tipped crossbow bolts, outfit their building structures, and the chance to battle against swarms of various enemy types, constantly altering the players’ defensive strategies. Even more, they will be able to structure a building wall by wall within a 3x3 grid, as well as lay down stair cases, attach rooftops, and add windows in any formation they choose. During the construction periods of the game, players are shown to use sledgehammers and axes to break apart walls for scavenging building materials, such as bricks and wood. While all of this information was a gift to all gamers out there, unfortunately, that is not that case. It was announced by Epic that Fornite will be a PC exclusive title only, as Cliff Bleszinski stated during the showing that it is specifically “a PC designed game”. Though a bit of a disappointment for console players, PC gamers will continue to have something worth look forward to. Both Bleszinski and Jessen have implied that Fornite will be frequently updated post release, even adding elements currently non-existent in-game, such as setting up death traps for enemies.

No release date for Fornite has been revealed so far, nor was a price point allowed to be discussed at the moment (had been asked if the game was going to be "free-to-play"). For now, Epic just wants to work hard to get the game out asap to gamers. Hopefully, we’ll hear more from Epic during the rest of the Comic-Con to share with all of you.