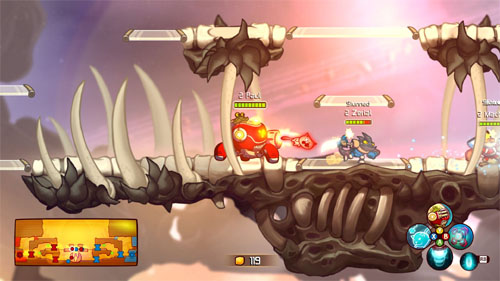 Back in May, we caught wind that console MOBA Awesomenauts would possibly be getting not just one, but two new characters in an upcoming free patch. Looks like the information was good, as we recently got word that patch 1.1 will indeed include Coco Nebulon and Derpl Zork, rounding out the Awesomenauts roster to 8 characters.

In addition, the patch will include balance tweaks, as is standard for MOBAs. Check out the full patch notes below:

Sounds like a pretty sizable patch. The patch is complete, and has entered the certification process, and Ronimo Games hopes that it will go live very soon. Awesomenauts features 3-player co-op (local, online, or mixed) on PSN and XBLA. If you missed our review for the game, we gave it a strong 4 out of 5.