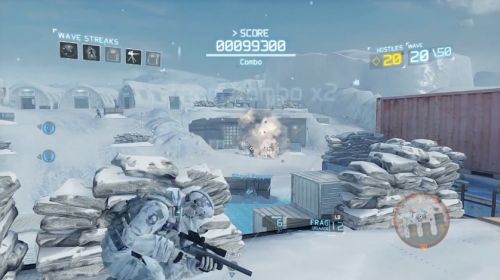 After a short delay, Ghost Recon Future Soldier is getting some DLC love. The Arctic Strike DLC is available through the Xbox Live Marketplace and the PlayStation Store. The content offers new multiplayer maps, a new versus mode, six shiny weapons, 10 additional levels of progression, and a new map for the game's cooperative Guerilla mode. You can check it out in this video while being aurally assaulted.

Whenever I hear this kind of music I just start screaming "GET OFF MY LAWN," and I don't even have a lawn.

- One new Guerilla mode map: Arctic Base - Kill AI bad guys with the help of your friends, IN THE SNOW!

What are you still reading this for? Grab your snow suit, gadgets, and guns and start blasting fools!

Ghost Recon Future Soldier supports four player online co-op for the campaign and Guerilla modes. Guerilla can also be played split-screen on the Xbox 360 and PlayStation 3 versions. The Arctic Strike DLC is available now through retail stores as well as the XBL Marketplace, and PS Store. It will set you back 800 MSP or $9.99.