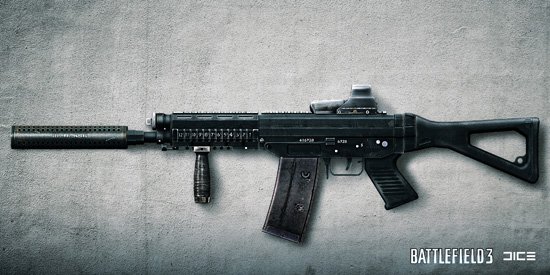 Raise the roof, fellow lovers of all things guns! We brought the chips-and-dip, and DICE's BattleBlog brought the deets-and-screens on Battlefield 3's gun customization. Keeping in mind that much of what you earn carries from co-op to multiplayer - and vice versa - it's exciting to see some real info on the weapons you'll be using.

Right out of the gate DICE claims that Battlefield 3 will feature "over 50 weapons". Looking at the full list of supposedly confirmed weapon expected to appear in the game, it's obvious that not all will be customizable. The primaries, though - assault rifles, carbines, shotguns, etc. - will have three available attachment slots for adding items like grenade launchers, ACOG 4x scopes, suppressors, and more.

As in Battlefield: Bad Company 2, you'll have to use a particular weapon in order to unlock attachments for it; except that this time around all points earned in co-op will count toward those unlocks. Previously the BattleBlog revealed that every Battlefield game is built "from the gun out", Battlefield 3 being no exception. Bullet trajectories, gun weight...even muzzle velocity is calculation within the code in order to make the experience a little bit more based in reality.

Authenticity is really important when you’re doing a modern day game like Battlefield 3. We know our players look critically at the guns in our games.

Senior Designer Alan Kurtz, you have no idea.