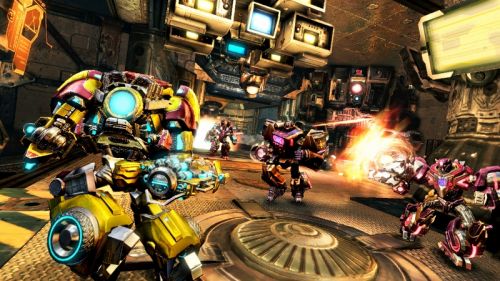 Hot off the digital presses, we have some new Transformers: Fall of Cybertron screens as well as a new action-packed video for your viewing pleasure. While the main focus is on the multiplayer mode, there is some co-operative Escalation footage in the video.

We can see several components of the create-a-character multiplayer options in the screens and video. Players will be able to customize their Transformers with different heads, bodies, vehicle types, and weapons. Character progression appears to be capped at level 25. Check out the video and enjoy some brutal Autobot on Decepticon action.

Sadly, we won't be playing as customizable characters in the game's cooperative Escalation mode. We'll have to settle for pre-set characters. Optimus Prime, Ironhide, Ratchet, and Bumblebee seem to be the four playable characters for the Autobot side. They make a quick appearance at the one minute mark. When I played the game at E3 I was told Jazz would be in the roster. I don't know if he was replaced, or maybe players will be able to unlock other Transformers as they progress in the game. If you think good guys finish last you can always play as a team of Decepticons.

Transformers: Fall of Cybertron features a four player online co-op Escalation mode. It will roll out on August 21st for the Xbox 360, PlayStation 3 and PC.