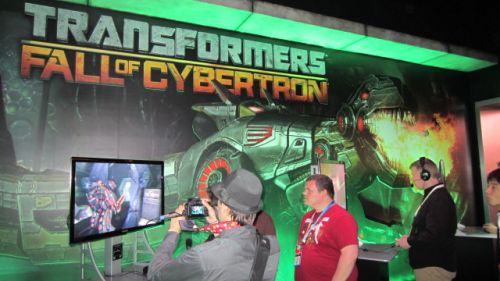 Today, High Moon studios announced Transformers: Fall of Cybertron would be bringing back War for Cybertron's cooperative Escalation mode. This is awesome news, because that means we can start covering it again! I was able to speak with Activision's JD Livergood, the associate producer for the latest Transformers game. We discussed the revamped Escalation mode while I got some hands-on time with a few single player missions.

I was able to confirm that Escalation mode would support four player online co-op, which is one more player than the title's predecessor. Each faction has their own Escalation mode - that's right, players can take control of either the Autobots or Decepticons. A team will be made up of four preset characters. The Autobots will feature Optimus Prime, Bumble Bee, and two more characters he didn't want to mention. The Decepticons will field Megatron, Starscream, and once again, two more characters JD may or may not have forgotten.

Players will take on waves of enemies while unlocking defensive upgrades. As usual, think Gears of War's Horde mode. One thing that will set Escalation apart from generic survivor modes is that there can be only one of each character in play, so you can't all be Optimus Prime. Each character will have their own special ability which should be essential to the team. It's not a co-op campaign, but at least it's got co-op. Sadly, a playable build of Escalation mode wasn't available on the show floor. I dried my tears with this sweet video featuring the Dinobots and one truly massive Transformer.

I did get to take a Grimlock and Swindle (the helicopter Decepticon?) for a spin. Swindle's level featured plenty of flying, running, and gunning. It was more TWfC, which is a good thing. Grimlock's level was a different beast all together. He can't transform at will. You have to build a rage meter which will let you make his Tyranosaur transformation. You'll build this meter by annihilating enemies with his Awesome Sword of Whoop-Ass. He crushes his enemies like some kind of magnificent mechanical murder machine. Once Rex-mode is activated, he's pretty much unstoppable. He can breath fire, eat enemies to regain health, and generally wreck up the place. JD explained that we would see Grimlock late in the game, since he's basically a super weapon.

JD also gave me a little insight for the mission structure. The game will begin with a huge cinematic, building up to the battle between Optimus Prime and Megatron. The screen will then cut to something like "Four days earlier..." and follow the story arcs of several different characters, showing the events that will lead to final epic battle. So the Autobot and Decepticon campaigns will be integrated into one story that shows converging perspectives. It' like Pulp Fiction, in space, with robots, and (probably) less swearing.

Transformers: Fall of Cybertron supports four player online co-op. It will be out on August 28th for the Xbox 360 and PlayStation 3.