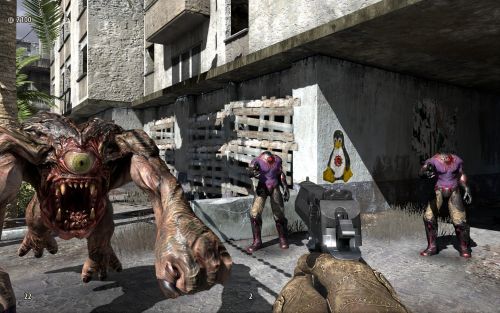 To prep for this article I read more about Linux than I ever have before (or at all). I've come to the conclusion that Linux is not Windows and not a Mac. Apparently it involves penguins, and Linux users will be getting their very own port of Serious Sam 3: BFE later this year. Huzzah!?

Everyone needs a little Serious Sam in them, including Tux-loving Windows-haters. It's funny, because I have no idea what I'm talking about. The image below came packaged with the press assets, so I guess it has something to do with the open source operating system. You can see that Sam is about to perform ballistic surgery on some alien scum. Always a good thing. Serious Sam 3: BFE features a whopping 16 players in online co-op and four players via local co-op. It's expected to launch on Steam later this year. Steamworks will be supported, and all the updated content from the PC and Mac versions will be included. You can see our Co-Op Review of the PC verision here.