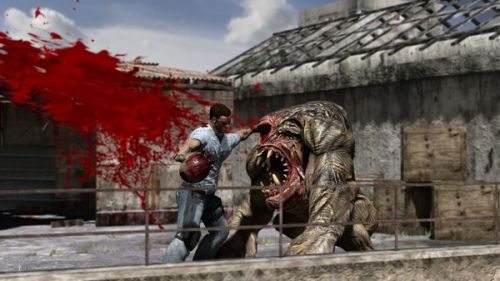 Serious Sam 3: BFE publisher, Devolver Digital, is drawing a line in the sand. They're sick of lackluster military shooters. Medal of Honor: Warfighter recently launched to less than stellar reviews, and doing so has earned Devolver's ire. They take offense to the overused tropes of the military shooter genre. "Peeking out from behind a wall" is not something manly men do. Real men circle strafe the crap out of their enemies, like god intended.

To point out the shortcomings of their more militarily-themed peers, Devolver Digital is having a contest. They'll be giving away 100 free Serious Sam 3: BFE codes for the Xbox LIVE Arcade. All you have to do to enter is complain about military shooters on Twitter and include the hashtag "#SeriousSam3XBLA." That's right. You were going to bitch about Call of Duty Medal of Honor anyway, so might as well score a free game. Here's that snazzy Serious Sam 3: BFE launch trailer, just to remind you of what you're tweeting for.

Just a reminder: This is Devolver Digital's shindig, not ours. I just think it's funny.