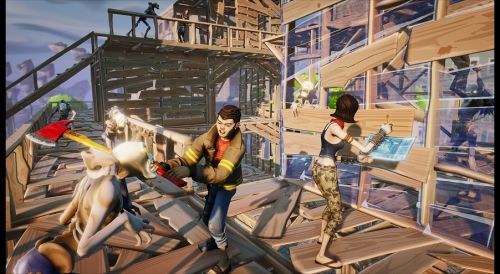 Curious to hear more about Epic Game’s highly anticipated PC title, Fortnite?  Tanya Jessen, producer of Fortnite, went on to describe new details about the development of the game.

It should be no surprise to anyone that we’re really looking forward to this game, with its main emphasis being cooperative play. While single-player isn’t entirely ruled out of Fortnite, we wanted you to hear more about the co-op specifics to this game and, also, what might be a glimmer of hope to the avid console user. If you’re curious to read the full interview, head on over to Rock, Paper, Shotgun to get the entire scoop: RPS: How does the structure of the game work? You were saying that I can be in my world or I can visit a friend’s world. Is it one persistent world that I’m in, or are there sets of levels?  How does Fortnite form a game around all of this?

Jessen: That’s something we’re still really iterating on and we’re really deep in design, because we have a whole bunch of different options. The idea is that you can have multiple worlds that are public or private, they can be single-player or cooperative, and you can leave those open. In other words, you can be away from your PC, and they can be running. Or you can turn them off. It’s up to you. But each of those environments will be dynamic and totally unique worlds. But in terms of the progression itself… Not ready to talk too much about that stuff. We have so many different things we’re doing where we’re iterating to find the most fun right now.

A game like, say, Minecraft, has gotten down the open-world gaming experience down packed, even more so when co-op partners can access a world with players offline. Fortnite seems to draw its inspiration from many different games and combines their best elements all into one, co-op enhanced product:

RPS: It’s certainly gotten a lot of discussion lately, though – with some developers even going so far as to call it the future. Meanwhile, the downside for players is that there’s no true single-player at that point. You’re always connected to servers. Are you still hoping to have a truly single-player experience in Fortnite as well?

Jessen: Yeah, absolutely. Single-player is going to be super fun. Like I said, we’re building it to be a co-op experience, but [co-op] won’t be required in any shape or form. In particular, we’ve got this personality we call the ‘lone wolf’ – the type of person who likes to jump in and play with their friends, but not necessarily all the time. Or they like to play primarily by themselves. We are definitely making sure that Fortnite will be fun for that type of person too. One thing we’ve learned from our experiences is that if you don’t design for co-op from the very beginning and make it a pillar of your project, then the game systems themselves don’t tend to feel solid in the co-op experience. So that’s how we’re developing the game from the outset. Regardless, Epic wants people to play this game together, especially with their online buddies. But what of its cost to play? Will we have to pay a monthly fee to play co-op mode with friends? Unfortunately, Epic doesn’t really have an answer for us yet:

RPS: That sounds a lot like, at least in theory, a free-to-play game, where it’s continuously updating and people can pick and choose the way that they have their experience. Is that what you’re aiming for?

Jessen: Haven’t really discussed it yet. We’re doing a lot of research to figure outhow we want to release it, but we want a lot of people playing this game, and we think it’s the perfect kind of game that you’re going to want to play with all your friends. So we’ll just have to wait and see. That’s for the business guys. [laughter]

RPS: Given the opportunity, though, would you consider using a constant connection requirement, like what Diablo, SimCity, or some of Ubisoft’s games have done? I mean, obviously, minimizing piracy’s only one potential reason for that – with the others, at least, on paper, pertaining more to convenience.

Jessen: It’s dependent more on gameplay for us, because Fortnite is a game that’s being developed as a co-op experience primarily. That’s our number one focus. This is the game that you’re going to want to play with your friends and it’s most fun with your friends. So whatever we decide to do there is going to be more relevant to what’s the most fun experience you can have with your friends [than piracy]. But I can’t really nail that down today. We understand that console users were disappointed to hear that Fortnite would only be a PC release, many of whom saw the initial trailer for the game at E3 last year and instantly fell in love. However, if things go well for Fortnite post release, a console future might not be entirely off the table:

RPS: I think the official line after all the smoke cleared at Comic-Con was that you’re PC-only for now, with the possibility of it coming out on other platforms later on down the line. Even so, a lot of major triple-A developers would still be hesitant about launching PC-exclusive in this day and age. Do you feel like it’s back as a viable triple-A platform?

Jessen: Well, I don’t think that ever went away for us. We made games as the opportunity arose. But in particular, with Fortnite, because of its super-dynamic nature and the fact that we see this as a living project, the only platform for us that made sense was PC, and especially with turning around that quick iteration time with UE4 and all of that. It was absolutely the way to go. It’s offering us the flexibility to add things on the fly. As people are having fun with certain weapons or enemies, being able to add more of that and keep the experience really fun and fresh for people is awesome. And right now you can’t really do that so easily on consoles.

But like I said, [PC] never went away. Innovation has always been happening in the PC space. I’ve been a PC gamer my whole life, since I was like 12. That’s what got me into the games industry: my love for Unreal and Duke Nukem 3D and all of that. I don’t know if it’s really a shift so much as that the flexibility of platform is something that’s been absolutely awesome, that people are now starting to take more advantage of. Maybe it’s just the fact that with the tools now, it’s getting easier to put out games on the PC.

Fortnite’s released date has yet to be announced, so stay tuned for a confirmation hopefully in the near future!