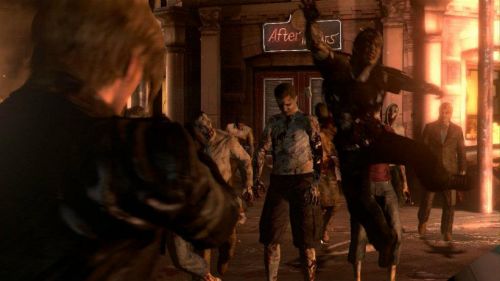 New details on Resident Evil 6 are surfacing today. We know the survival horror/extreme action title (apparently Capcom doesn't know the difference) is centered on three cooperative campaigns. In addition to the co-op gameplay there will be a little something extra for the more competitive gamers out there. RE 6 has a new mode for all the griefers, player killers, and all-around unloved evil people out there.

In Agent Hunt mode, vindictive gamers will be able to invade other player's games. That's right. You'll be able to jump into Leon Kennedy's campaign and finally give him the beat down he deserves. Invaders will play as normal low level enemies, such as zombies and J'Avo. You'll basically be playing as cannon fodder -continuously respawning, sneaky cannon fodder. According to Eurogamer you will mutate into something... more deadly from time to time. Two players can invade a game at once, plus they can use voice chat to coordinate their attacks. Is it co-op? Heck no. It's versus, baby. Will it be fun? Of course!

Agent Hunt can only be unlocked after completing the game. So all you Demon's Souls/Dark Souls invasion-happy jerks (you know who you are) who like to prey on newbies will be out of luck. You won't be able to ruin someone's day until they've played through all three campaigns. Not only that, it's an entirely optional feature. Once you beat the game you can simply turn Agent Hunt off if you wish to vanquish Umbrella in peace. In single player news, Ada Wong has officially been revealed as a playable character. She'll have her own solo campaign. That's right, she works alone, so there won't be a "helper." She'll be wielding her versatile crossbow. According to Andriasang, when you encounter Ada in the normal campaign, she may be controlled by another player. Whether she can help or hurt you remains to be determined. Like Agent Hunt, to unlock Ada you'll have to finish the game. It seems that her campaign will intersect with all three of the main stories, offering a different perspective to the ongoing events.

Resident Evil 6 is shaping up to be one monster of a game. It supports two player local co-op, four player online co-op, and possibly six player online co-op. If all the campaigns converge, including Ada's, I could see the game featuring seven player co-op. Hell, there's even a prologue campaign that's still under wraps. We'll have to wait until October 2nd to uncover all the game's secrets. It will be available for the Xbox 360, PlayStation 3, and PC.