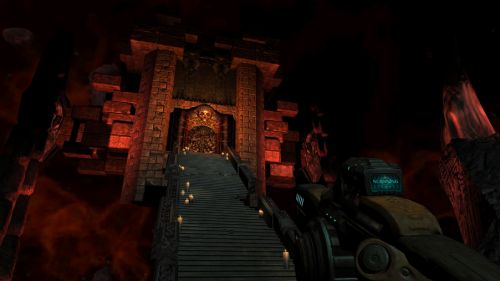 QuakeCon is going on right now in the heart of Texas, where id and Bethesda are hosting one of the biggest LAN parties in the United States.  Also at QuakeCon?  Lots of good games from the publisher and the developer, including a recent reboot of the classic Apogee game Rise of the Triad.  Also on display is the upcoming re-release of DOOM 3.   DOOM 3: BFG Edition features enhanced graphics, 3D support, and new levels of gameplay - which is what the latest trailer is all about.

Bethesda told us earlier that DOOM 3: BFG would feature co-op gameplay, hopefully they didn't just mean in DOOM 1 and DOOM 2 which is included in the package for a budget friendly $39.99 price tag.  The game will be available this October for the PC, Xbox 360 and PS3.

To celebrate QuakeCon, Steam is offering a massive bundle for sale which features almost every id and Bethesda title available.  With 32 games total you'll get classic co-op games like DOOM and Heretic as well as newer games like Brink and Hunted: The Demon's Forge.  Also included are single player RPG mammoths like Morrowind, Oblivion and Skyrim.  The total price for the 32 game bundle?  $99.