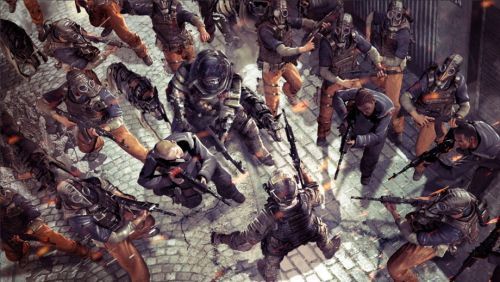 Activision is still pumping out content for Call of Duty: Modern Warfare 3. Xbox 360 owners can now purchase "MW3 Collection 3" for 1200 MSP ($15). This collection has been tailored almost exclusively for co-op play. It features a new Special Ops Chaos mode, four new Special Ops missions, and three Face Off maps for the PvP lovers out there.

Chaos mode is the most interesting addition. It takes MW3's cooperative Survival mode and just goes nuts with it. Unlimited enemies, weapons, and score multipliers turn the already tense gameplay into an arcade-style frag-fest. Chaos mode will be available on four of the core stages: Resistance, Village, Underground, and Dome. Check out the trailer and watch the bodies hit the floor.

If you listen closely, you can hear the wubs under the gunfire.

Wow. That looks intense. I may have to dust off my copy of MW3 and dive into Chaos mode. If you're looking for something a little more tactical you can play the four new Spec Ops missions: Arctic Region, Vertigo, Light 'em Up, and Special Delivery. These missions offer a variety of destructive fun. Set beacons for air strikes, use laser guided RPGs, invade a fortress, and take the roll of a helicopter gunner. Grab a buddy and tear stuff up.

The Face Off maps are for the multiplayer versus crowd. They feature smaller maps which are designed for 1v1 and 2v2 play. These new maps have been designated Intersection, U-Turn, and Vortex. That's right. Two maps take place on war-torn streets, the other places a fire fight in the middle of a tornado. Makes perfect sense. You can find more details for each mission at CallofDuty.com.

Call of Duty: Modern Warfare 3 supports two player local or online co-op. The "MW3 Collection 3" pack is available now through the XBL Marketplace. It is expected to be available for PS3 and PC users in about a month.