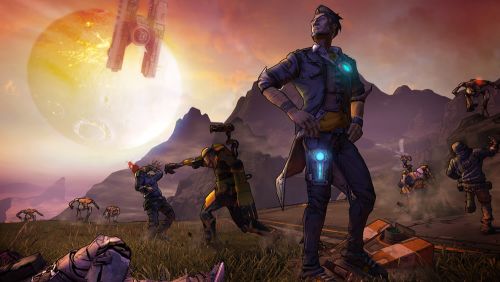 Borderlands 2 hits store shelves in a little over a month. The hype train is thundering full speed ahead. Today we've got a new video featuring the villainous Handsome Jack. We also have some new information about end-game content for high level characters, as well as some details on the downloadable Mechromancer class.

The new trailer focuses on the main antagonist of Borderlands 2, Handsome Jack. It also features a nice selection of gameplay footage for each of the classes. I'm still confused as to why the main characters are called "vault hunters." Didn't we find the vault in the last game? Are there more vaults? Am I over thinking it? Oh look! A video!

Eurogamer has been positively drowning in Borderlands 2 news today. Most of the information is about end- game, high level content. It's just a little spoilery, so you may want to skip to the Mechromancer bit.

High level characters will have another "Invincible" boss to battle. Anyone who maxed out a character in the original Borderlands most likely squared off against Crawmerax the Invincible, a truly difficult boss. Four co-op players had to use all their skill and cunning to beat the colossal monster. Okay, so a really good Siren could solo him, and even I took him out with my own Berzerker using the cliff glitch. Still, he was a huge pain in the butt.

A lot of the end-game pull is that four-player co-op challenge at a high level against a really tough-to-fight boss. He is designed to be impossible. I'm not going to say he's not soloable, because I know how well gamers break games, but he really is tuned for that end-game, four-player co-op fight, testing your build and your gear and your equipment and your ability to work together as a team. His rewards are great. So, if you are that end-game player, this is your challenge right here.

That sounds great, but one high level boss fight that requires four player co-op is not really a lot to look forward to. That's why Gearbox is implementing "True Vault Hunter Mode." This is a much more developed version of Borderlands' "Playthrough 2." In the original, players were greeted with more powerful enemies who had better weapons and more hit points upon completion of the game. Basically they just added numbers to their attack and defense stats. The problem is that if players finished all the side missions they were much more powerful than their enemies. The improved baddies of the second playthrough were so much cannon fodder.

Gearbox hopes to remedy this with the advanced enemies of TVHM. Not only will they have better offensive and defensive capabilities, their AI will be improved. They'll also use more shields and body armor, plus some gnarlier enemies are won't even show up until TVHM.

To combat all of these new badasses players will have access to "game changer" skills. These skills will take your character to a whole new level. If you remember the skill trees from the original Borderlands, you could become ridiculously powerful. Remember Mordecai's Trespass skill? Yeah. These "game changer" skills will be superior. Nuclear capability, semipermanent invisibility, massive damage reduction coupled with chaotic health regeneration, and slag-slinging are all on the table. That brings us to the Mechromancer, a new class which will be available as DLC about 60 days after launch. We don't know too much about this character. We do know that her skill trees will focus on abilities for her summoned pet, a robot called Deathtrap. Doesn't he sound cuddly?

The Mechromancer is still a work in progress. Another Eurogamer article (it's like these guys took a trip to Gearbox or something) covers some more of her powers. A shock damage skill tree is most likely in the works, making the Mechromancer essential against shielded enemies. They also covered a skill tree called "Best Friends Forever." This tree is specifically tailored for newcomers to the series, offering a very generous aim assist. As someone who likes to play one handed, due to child rearing, drinking, and dog petting, I for one welcome the extra help.