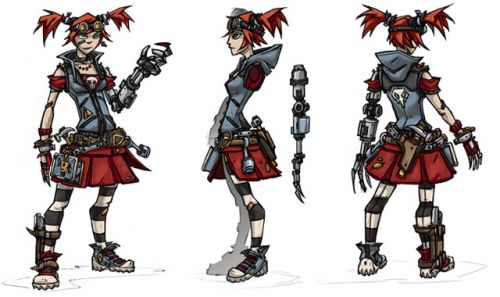 Looks like the Mechromancer, a machine manipulator that controls a giant, Claptrap-type robot on steroids called a “Deathtrap”, might be arriving to the Borderlands 2 much sooner than we have come to expect.

The Mechromancer was announced as the fifth playable Borderlands 2 class to make it into the game, and will be free for those that pre-order the game. Originally, Gearbox stated that she would be available to play as after 60 days post release date (set for September 18th). However, we have just got word that they’re actually ahead of production schedule and might release the Mechromancer class that much earlier. Right from the horse’s mouth, Randy Varnell, producer of Borderlands 2, has said, “We’re going to beat that estimate,” and we couldn’t be happier to hear it. At the moment, he is not at liberty to discuss a new date for the character’s release, though he has the utmost confidence in the Gearbox team completing the Mechromancer much faster than they’ve ever planned for. Just after Gearbox put the finishing touches on Borderlands 2 and sent it off in July to get its certification, they began to quickly change their focus on the Mechromancer’s final development stages.

Pre-order Borderlands 2 to gain immediate access to a Mechromancer code and download her once she is made available. Again, no new date for her has been announced.