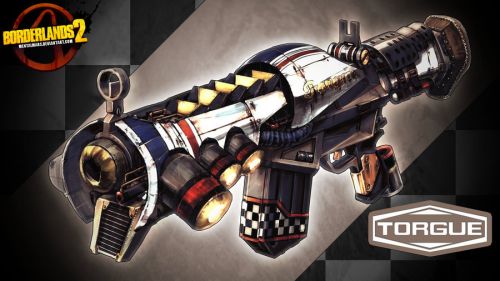 That's right, information for the second Borderlands 2 campaign add-on has been leaked. Actually, I don't think "leaked" is the right word - "teased" seems to be more appropriate. Three new Trophies appeared in a  PlayStation 3 update when "Captain Scarlett and Her Pirate's Booty" went live two days ago. A similar update outed the"Captain Scarlett" DLC when the Mechromancer add-on became available. Either Gearbox keeps on making the same mistakes, or they know exactly what they're doing.

The new content is called "Mr. Torgue's Campaign of Carnage." I'm a big fan of Mr. Torgue's craftsmanship. Personally, I can't wait to meet him. Torgue weapons are known for their checkered paint schemes and explosive capabilities. Everyone likes handing out explosions, right? Receiving them, not so much... Check out the Trophy titles and requirements after the break.

1 Bronze - Explosive - Complete the mission "Long Way To The Top".

1 Silver - Motorhead - Completed all Campaign of Carnage side missions.

1 Gold - Obsessed - Collected 10 pictures of Moxxi in Campaign of Carnage.

This information comes from the NeoGaf forums, which is the same source that revealed the "Captain Scarlett" Trophies a little over a week ago.

FYI: The "Captain Scarlett" DLC dropped one week after the Trophies were "leaked" via the PS3 update. Will "Mr. Torgue's" launch next week? Honestly, I don't think it will, but I wouldn't be totally shocked. Nothing has been made official by either Gearbox or 2K, yet.