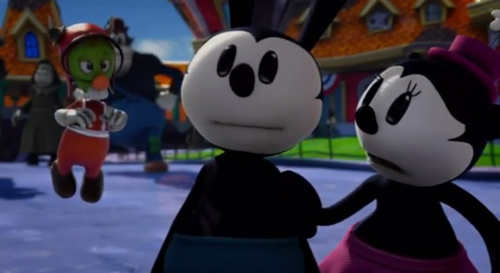 Recently, another behind the scenes video of Epic Mickey 2: The Power of Two’s development has surfaced on Youtube by Disney Interactive. This time, the footage features Creative Director, Warren Spector, discussing the two main characters of the game, Mickey Mouse and Oswald the Rabbit, who work cooperatively to traverse their magical world of The Wasteland.

In addition to our two, well-known heroes, the video talks a bit about the other characters of the game, such as the anti-hero Mad Scientist of the previous Epic Mickey, goofy, mechanically inclinded enemies called the Blotworx, and Oswald’s love interest, Ortensia. Despite being non-playable characters, they help Disney Interactive take the story of Epic Mickey 2 to a new level which hasn't been seen in a Disney game before. Ortensia, especially, plays a very strong female role in the game and doesn’t take the back-seat that common side-characters normally would.

Oswald has his Remote Controller, in addition to his “Boomerang Leg” and “Helicopter Ears”, allowing him to control robots, stun enemies, and access specific machinery around the environment. Mickey, of course, has his Magic Paintbrush and Paint Thinner that can manipulate the world in different ways. In conjunction with Oswald’s Remote, Mickey can do more with his paint than he ever could alone. We, of course, think that Epic Mickey 2 will shape up to be a great co-op emphasized title to have in our libraries, and for all right reasons.

Epic Mickey 2: The Power of Two releases on November 11th for Xbox 360, PS3, and Nintendo Wii.