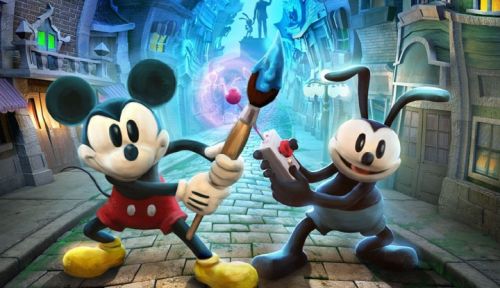 Everyone should probably take a break from shooting dudes in the head and take a look at what Junction point has in store with Disney Epic Mickey 2: The Power of Two. The latest video is a quick glimpse into what Mickey and Oswald can do when they combine their co-op powers.

After sitting down with Warren Spector at PAX Prime this year, we became infatuated with his take on player choice in a game. It's really simple - let the player accomplish a goal however they want and don't limit them to one solution to an puzzle objective. There may be a quick minute of footage, but the video is chalk full of different ways that Mickey and Oswald can interact with the world.

The beauty of Epic Mickey 2 is that you are never limited by the game. With Mickey painting things in and out of the world combined with Oswald's knack for electronics, it opens up a world of opportunities that you and a co-op friend.

We're closing in on the release of Epic Mickey 2: The Power of Two which comes out on November 18 for Xbox 360, Playstation 3, and the Nintendo Wii. It features 2 player local co-op and it shaping up to be one of the most brilliant platformers we have seen this generation.