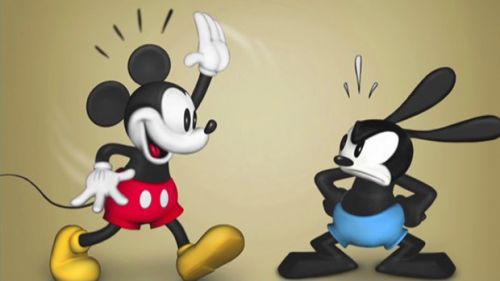 Warren Spector, designer for Epic Mickey, admits that he didn’t make the first game as “epic” as he wanted it to, but Disney Interactive Studios next Mickey game in the works, Epic Mickey 2: The Power of Two, will hopefully give him a chance to truly be epic, in every sense of the word.

Oswald the Rabbit, Mickey’s rival from the previous game, is making a triumphant return in this game as Mickey’s now ally, in so doing creating a split-screen co-op mode together. Oswald will carry a special remote control that has the ability to control electricity (and possibly fly like a helicopter with his ears), while Mickey will continue to command his magical paintbrush. To overcome the game’s obstacles, the pair will have to work together. At any point, a player can drop in or out of the game, making it a very convenient for parents to hop on if they want to play with their kids or hop off if they’d just want to watch them having fun.

It's drop-in, drop-out co-op," said Spector. "You can sit down at any time with a friend who is playing as Mickey, and you can take control of Oswald. If you're playing as a single player, Oswald will be there every second of the game. He's not just a multiplayer character. He's a helper, whether you're playing alone or with a friend or family member.

Spector hopes that, with the back story from the first game and the experiences made while playing as Oswald will bring the character more fans in the coming game, as well as more fans to Epic Mickey. Those of us who’ve played the first game know that the horrible camera angles and lack of dialogue grew old quick, much like Mickey himself. Hopefully with this sequel, the polishing of the gameplay and the new addition of split-screen co-op play will propel the Epic Mickey series to new heights.

Epic Mickey 2: The Power of Two has yet to receive its release date, but it will be shooting for the end of this year. For now (depending on the release of the Wii U and rumored 3DS versions), this game will be available on the Wii, Xbox 360, and PlayStation 3.