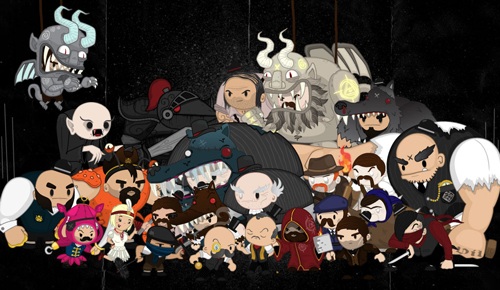 Foul Play is a side-scrolling brawler depicting the "perilous adventures" of Baron Dashforth. The legendary daemon hunter has decided to share his previously surreptitious exploits with the world. How is he going to do this? Through the magic of theater, of course!

The good Baron will re-tell his utterly astounding (and incredibly true) life story. Since the game world is literally a stage you'll be doing battle with costumed extras. Players can expect a humorous tone to coincide with the cartoony visuals. Check out some of the concept art and screenshots at the bottom of the page.

Developer Mediatonic has introduced a "Magnificent" meter which should help break up the tedious pitfalls of the scrolling beat'em up genre. Players will be performing for an interactive audience. Simply mashing the punch button will quickly bore the crowd. Luckily, the Baron has a sidekick named Scampwick (that's you, Player 2) who can help keep the action fresh with special cooperative attacks. You must thrill the crowd to succeed.

Foul Play supports two player co-op. I contacted Mediatonic to see if the game supported local or online co-op, but I haven't heard back from them yet. Right now the game is in our database as two player local co-op title, but that is subject to change. I'm sure we'll receive more details before the game releases on the XBLA in Q2 2013.