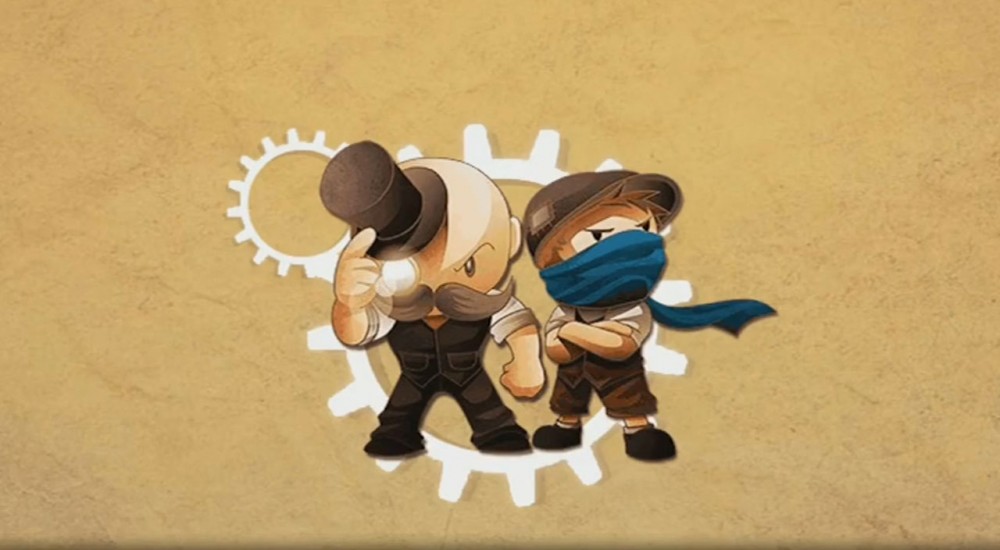 By now, the downloadable game market has matured to a level where a game has to have something special to stand out.  Perhaps a new mechanic will be added, or it will redefine the genre in which it is set?  Foul Play does neither of these things, but it does have something in abundance; charm.  In a world of soulless first person shooters, a little charm can go a long way and this is certainly the case here.

Foul Play is a side scrolling beat ‘em up from the Double Dragon school of fighting.  Another game that immediately springs to mind when starting to play is Castle Crashers, one of the bestselling download games this generation.  You cannot deny that Foul Play is aimed towards the same demographic as Behemoth’s behemoth.  The game opens on a stage as Dashforth and Swampwick begin to talk about their adventures.  They leap from their seats straight into the action, the scenery of the stage changing to reflect the nature of their tale.  At the front of the screen is an audience, they will become key to how successful you are in the game as you not only have to complete each level, but impress the theater audience as you do so. This is a local carriage, for local people

Graphically the game looks great, both Dashforth and Swampwick are knowing takes on British stereotypes of the Victorian (and post Victorian era).  Dashforth looks like the Monopoly Man after Hulking out, whilst Swampwick is the stoic working class hero.  If you combine the cutesy character design, knowing humor and side scrolling fighting, you are constantly reminded of Castle Crashers, but in a good way.  The fighting in Foul Play can be far deeper that than Behemoth’s game, if you wish to explore it.  As you progress, you unlock new skills that can be used in combination for a wider set of moves, this means that the game is not all button bashing (but you can play that way if you wish).

Why would you bother to try all the different combos?  It is vital to get the higher scores.  The audience dictates how many points you earn and the higher your combinations, the more they are impressed and the better your end of level score.  It is not unusual for you to hit 200 combinations towards the end of the game as your vision is obscured by whooping audience members throwing their hats into the air.  Extra layers are added with in level challenges; can you get a 100 combo or save a hostage?