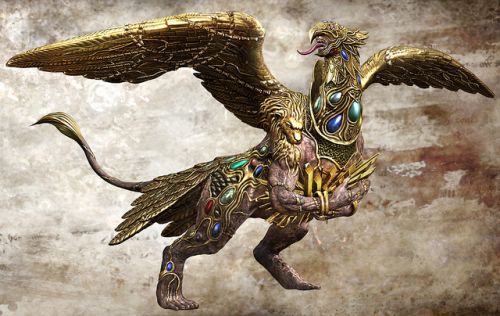 We haven't heard much about Soul Sacrifice lately. The PS Vita's cooperative spell-casting game features gruesome spells which are based off of physical sacrifices made by the sorcerers who would wield them. Players must perform all sorts of different horrific acts upon themselves to use the best spells. My personal favorite is the spine sword spell.

The enemies of Soul Sacrifice are human beings who have been twisted by the magic they've abused. Here's a little insight into the Griffon (pictured above):

He was a noble. His lands were vast, and he lived in opulence, supported by heavy taxes exacted from those who lived in his dominion. One day, he was presented with an offering from the people — a golden statue of a figure combining beast, bird, and man. His heart was swept away by the figure, and he felt an unnatural adoration for it. The power of the unnatural love was such that it drove him to kill his wife for hiding the statue from him. The years passed, and eventually the people rose up in rebellion, unable to further shoulder the burden of the noble’s oppressive taxes. They swarmed around the noble’s castle and found him in his treasure vault. By the time they found him, however, he was no longer human. His love of gold had allowed the golden statue, which he loved without limit, to take over his body, transforming him into the statue’s likeness.

If you just glance at the Griffon it looks like a pretty standard fantasy monster. If you look a little closer you'll notice some disturbing details, such as the malformed human feet and the hands clutching gold bars. Then of course there's the human-like snarling mouth. So let that be a lesson: statue loving is bad for you.

PlayStation.blog also has some more information on some specific spells. These seem pretty tame when compared to the eyeball-gouging, flesh-tearing, self-immolating powers which have previously been on display. Plants such as “swordsman’s seedlings” and “swordmaster’s seedlings” can be given as an offering to harness this close combat magic. The seedlings grow sharp and hard, cutting enemies with their edges. “Stone wall ruins” can be given as an offering to harness defensive magic. An enormous defensive wall appears, protecting you from your enemies’ attacks. “Giant’s bones” can be given as an offering to harness close combat magic. Your fist becomes hardened and massive, striking down all before you. “Thunderstone razors” and “Thunderstone blades” can be given as an offering to harness this close combat magic. The axe, shrouded in thunder, can strike tremendous blows.

We'll have to wait and see just how these practical elemental spells are "offered." I'm sure these spells will be useful, but they're missing some of the depravity of the more intense sacrifices that originally caught my eye: Now that's what I'm talking about.

Soul Sacrifice will support four player online co-op. It will launch on the PS Vita on March 13th.