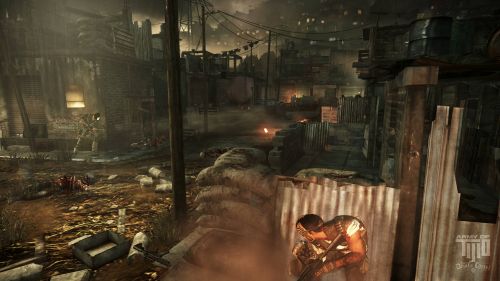 Hot off the fresh trailer from Gamescom 2012, we've got the 10 minute demonstration of Army of Two: The Devil's Cartel from the EA Press conference.  It showcases the game's co-op gameplay as Alpha and Bravo deal some serious damage in what is claimed to be a much more mature game.  As long as they are wearing those ridiculous masks, it's hard for me to take that last line seriously.

Also included with the gameplay video is a handful of new screens that showcase a pretty solid looking third person shooter, especially this late in the console's life cycle.

In related news, we had rumored that a game title Army of Four was in development at some point, but when The Devil's Cartel was announced, wondered what had happened to it.  Turns out - it's the same game according to producer James Nance.

We had [two Army of Two games] and then there was an expansion pack for Army of Two, so it became Four internally. It's not the fourth installment, it was an in-development, working title. Now it's The Devil's Cartel.

Everything we do is focused around co-op; the level building, the UI, the features, all are focused on getting two guys to work together in an epic Hollywood blockbuster fashion.

We could have done competitive multiplayer, we could have done four-player or something like that, but we didn't think it was true to what the franchise is. Couch co-op, online co-op, we wanted to stick with that.

James Nance, we salute you.

Army of Two: The Devil's Cartel will be out on Xbox 360 and PlayStation 3 in March of 2013 and will feature two player couch and online co-op play.