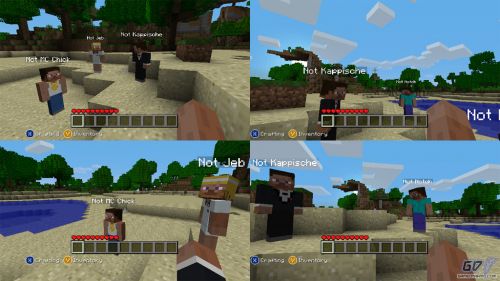 Just a friendly reminder to the Co-Optimus community: The Minecraft: Xbox 360 Edition requires an HDTV for local co-op play.  We mentioned this in our Co-Op Review yesterday, although it may not have been clear. We have updated the review accordingly.

The game's XBLA information page doesn't list the HDTV requirement, but it does mention it in the trial mode and once you have already purchased the game (see image below). This has upset many gamers who bought the 360 version specifically for the local co-op. Kotaku has reported that some customers with standard definition TVs have been able to get refunds from Microsoft while other have not. According to Major Nelson's blog, Minecraft: Xbox 360 Edition has broken all previous XBLA sales records. There are already over 400,000 people on the leaderboards. The poor souls using SDTVs will have to settle for eight player online co-op, or upgrade their displays. Hopefully Microsoft will add a note clarifying the HDTV requirement for local co-op to the game's listing in order to avoid future confusion.