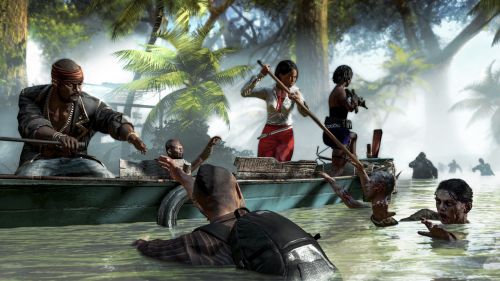 Dead Island Riptide wasn't playable on the showroom floor at PAX 2012, not that it needed to be. At a glance the sequel to one of 2011's best cooperative titles appears largely unchanged. The same characters are present, it's still set on a tropical island, and the zombies are still extremely kill-able. Despite the familiarity, after viewing the presentation I could see that DI Riptide was not going to simply be more of the same.

One of the producers worked his way through the demo, giving some of the background information that was released late last week. Logan, Sam B, Purna, and Xian Mei are all returning for the sequel. DI Riptide picks up almost immediately after the events of Dead Island, finding our four survivors stranded on the monsoon-flooded island of Palanai. The quartet of carnage will also be accompanied by a new character, but I didn't see him (or her) in the demo.

A huge storm has flooded the island, forcing players to use boats as their main form of travel. The waterlogged undead are still a threat, as they can pull players from boats and quickly divide the group if the pilots aren't wary. I watched the producer and another player salvage two miniguns from some nasty looking wreckage. The characters had to carry the large weapons as if they were food supplies or gasoline from the first game, so don't expect to Arnold-it-up and wield the minigun yourself. Players can throw the guns and take out the legs of zombies, so you're not totally defenseless while hauling cargo. They loaded their loot into a boat and sped off, ramming and running over grasping corpses as you would with a pickup truck in the original. It is here we are warned that we can be pulled from vehicles by the undead hordes. They eventually make it back to their stronghold, a decayed church which is missing a few of the finer things like walls or a ceiling. Picture an old mission with a single spire in the middle of a swamp and you'll get the idea.

The ruin has all the appearances of one of the hubs from the first game. NPCs mill about, the rest of your party is there, and there's a fellow buying and selling items. The inventory looks as clunky as ever, but we are told that they have streamlined it and fixed the bugs from Dead Island. They place the miniguns on a few strategically located tripods and things begin to get interesting.

We're told that they have added a new defensive element to the game, where players will have to barricade and hold a point from a massive zombie assault. In this instance players will need to get through the tunnels below the church, which have naturally become flooded during the monsoon. The pump will make horrendous noise, bringing out all the undead nasties. They get to work running fences across the holes in the walls and taking up defensive positions. Players will now have access to proximity mines. They place several throughout the open area between the church and the jungle. Sam B and Logan place a barricade while Purna and Xian Mei TCOB.

To start the mission the producer simply tells the man at the pump that they're ready, and then IT IS ON. The red ring from the first game is back. As soon as all the players are present the battle is triggered. Zombies are everywhere, explosions puntuate the staccato fire of handguns and rifles. Oh, did I mention firearms will be more prevelant in this game? Because they will be. The fences are flimsy, but they stall the Walkers and Infected long enough for players to score easy headshots. Purna and Logan take turns manning miniguns and rushing between soft spots in the defenses. It's like a Horde mode, but it has been integrated into the core game. The zombies eventually get tougher, themselves exploding in gaseous bursts. The landmines are still doing their thing, but now it appears several heavy Thugs are assaulting the church. It's a little hard to follow at times, but the players are doing a good job of repelling the attacks. Propane tanks are being hurled at the undead, and after they knock a few to the ground they explode when fired upon, clearing large swaths of corpses from the battlefield. Once the last zombie has dropped, the tunnels are clear of water and the players are free to continue the game.

Overall the whole thing came off as a very intense, chaotic ride. I think defensive missions like these will be a welcome addition to the Dead Island franchise. It was a little unsettling to see the NPCs kind of standing around and not doing anything during the mission. I think the other playable characters were supposed to lend a hand, under control of AI, but I didn't really see that in action. It looked to me like only the two controlled characters were doing anything, but it was very intense, so I may be wrong. Either way, it should be a blast with a friend (or three).

Co-op will be similar to Dead Island. Players can drop in and out of each other's game. A level one character can play with a level 50 character. When they encounter a zombie it will be scaled to everyone involved. So a level 20 will see it as a level 20, a 32 will see it as 32, and a 47 will see it as a 47, plus or minus a level or two, of course. You'll also be able to import your orignal Dead Island characters. They didn't go into any details on a new level cap or specific skills, but I'm hoping for nunchuks. Flaming nunchuks for everyone!

Dead Island Riptide supports four player online co-op. It will be out on the Xbox 360, PlayStation 3, and PC later next year.