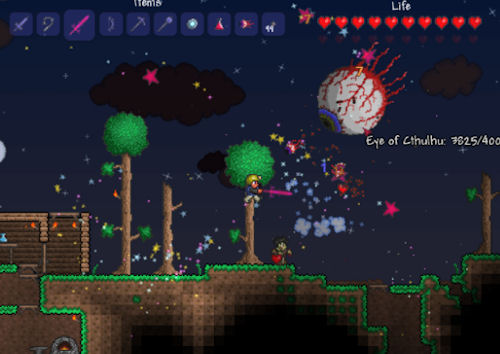 We have another indie game to show off for all of you! Terraria, a side-scrolling, block-building adventure game, that has established quite the following on Steam will be coming to your consoles soon enough.

Shooting out of indie developer, Re-logic, and published by 505 Games, Terraria will soon hit the console scene for all co-op lovers out there. Since its release in 2011 on the PC, the game has gathered 1.6 million players. The game features a world that you can shape to your liking, pixel block by pixel block, with the capability of 8 co-op players at same time. Resource gathering and exploration are the basic aspects of the gameplay, but Terraria pulls them off with surprisingly refreshing styles. 505 Games’ Tim Woodley has recently stated his excitement for the coming console versions:

The block-building genre has taken the world by storm and Terraria has garnered a massive following through its increased focus on adventure and discovery. We’re looking forward to bringing an already hugely successful experience to a brand new console audience and we can’t wait for the existing Terraria fan base to experience all-new content.

Now, before you say that this game is just a Minecraft side-scroller, think again. Apart from Minecraft, Terraria boasts a way larger assortment of items to collect, harvest, and create, and has a much deeper focus on platforming and character growth/leveling up. Even with the popularity of the infamous Creeper mob, Terraria’s gameplay has many more monsters and more weapons to battle them with than the latter. Still, if you’re more of a side-scroller fan than a sandbox fan, this indie game might peak your interest.

Both the PlayStation Network and Xbox LIVE Arcade versions are now in development and will arrive shortly into 2013. For more info on Terraria, check out our previous PC review here.