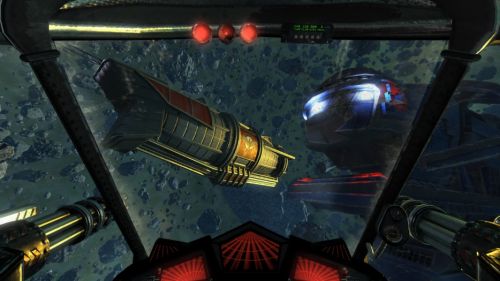 Miner Wars has been in development for quite a while, in fact our first article on the game was from July of 2009.  Yes, it's been a long road for the game and there's quite a bit to update you on as things settle in.  First off, the game originally started as an MMO but is now actually two separate games: a fully featured single player / co-op / versus game and an MMO.  There's actually a third game, Miner Wars Arena, that was just released that's more arcade style gameplay as well set in the same universe, but that's a bit of an offshoot project.

The game we care about is the one that's slated to hit later this year, and that's Miner Wars 2081.  The six degrees of freedom shooter (think Descent) offers a full single player story that's playable in co-op with up to 16 players.  That's right, you can have a squadron by your side as you take on the various factions in the game which includes Russians and Space Nazis.  Miner Wars 2081 will also scale up the difficulty according to the number of players in your game ensuring a not so smooth ride into the mines.

I played a bit of the alpha demo last night and really came away impressed with the feel of things.  The combat is fast paced and arcade like, there's RPG like elements - including mid mission purchasing of upgrades.  There's even sections where you have to rescue miners trapped, a definite throwback to Descent.  Another standout feature is the ability to simply blow away pieces of the rocky caverns and make your own path at times - something reminiscent of Red Faction.  The controls felt tight with a mouse and keyboard and a gamepad was supported as well. A demo of Miner Wars 2081 available for free on their website right now, and while you can't play co-op in the demo, you can purchase the game and get immediate access to the full alpha which features co-op play.  Right now the game is 50% off, just $19.99.

Miner Wars 2081 is slated for a release later this year on PC with the MMO version releasing next year.  It's also been recently announced the game will support the Occulus Rift VR headset when released.  The team hopes to have the game available through Steam, and is currently up for voting on Greenlight.