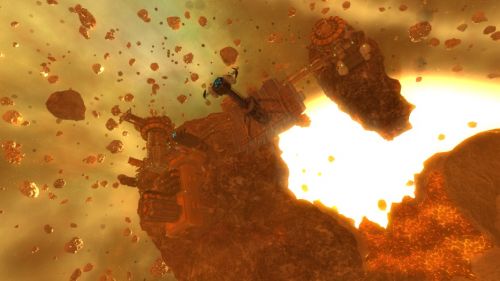 Miner Wars 2081, the game that's all about mining and warring in space, has just received a major update,  switching the rendering engine from XNA to DirectX for improved stability along with a few other tweaks and fixes. More notable, however, is the fact that both the game and the VRAGE engine's source code have been released, opening the flood gates for the modding community to sweep in and do what they do best.

Anyone who owns a copy of Miner Wars 2081 can grab all 360,000 lines of code from GitHub, fork it, change it,  compile it and run. This isn't open source in the traditional sense, but it gives the same amount of freedom in terms of creating mods, making total conversions, or doing what everybody knows will eventually happen: the Miner Wars 2081 nude pony patch.

Miner Wars 2081 supports online co-op for up to 16 players and is currently available for PC. Our Miner Wars 2081 review has the full scoop on the co-op experience in the game.