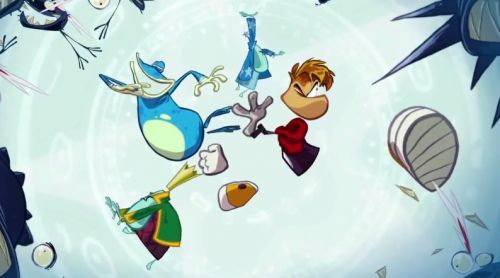 They tell us that symmetry is beauty, that people with the most symmetrical faces are the best looking.  Well as someone who looks like the world’s scariest Rorschach test, I can tell you this is a lie.  The developers behind Rayman Legends also disagree, as they have purposely designed the Wii U version of the game to have asymmetrical co-op.

Michel Ancel, the man behind the Rayman franchise, is now on the record explaining what the asymmetrical co-op in Rayman Legends means.  Even better, thanks to G4TV, it comes with visuals.  When someone is playing Rayman Legends on the Wii U the player with the new WiiPad won't have the exact same gaming experience as the player using the traditional controller.  The example shown in the video is of the WiiPad player using a shield to protect the other player.

This asymmetry is not new to gaming, with games aimed at a younger audience in particular using it for a while - Super Mario Galaxy 2 had one player shooting things on screen, whilst the other player carries on as Mario.  What Rayman Legends represents is an evolution of this concept, so that both players are having different, yet equal, experiences in co-op.

Witness the below video for you own insight and read subtitles that are probably not needed - nothing says respect more than subtitling a French man speaking perfectly adequate English (you should hear my French).