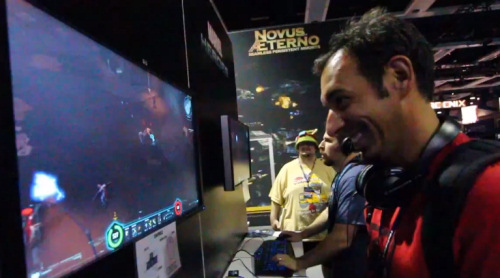 We're still churning through the video footage from PAX 2012, the latest coverage we've unearthed is from the recently announced free to play Action / RPG from Gazillion Entertainment and former Diablo developer David Brevik.  Marvel Heroes brings players into Marvel's Universe and allows them to take control and customize an impressive cast of characters from Wolverine, The Hulk, all the way to the more obscure like Emma Frost or Squirrel Girl.

Mike and I went hands on with the game while Locke decided to sing a Marvel themed version of Call Me Maybe and conduct an interview.  Yes, this is how Co-Optimus rolls. We got to play a full 15 or 20 minute mission while at the booth - one that starts out in an open world sort of area where you can just dynamically meet up with other players and if you decide, party up.  The world was pretty interactive too - cars and other objects were destructible.  The feel of the game is spot on old school Diablo meets new school X-Men Legends.  Yes, it felt that damn good.

You'll have your own set of characters to level up and play with, but perhaps the most interesting feature, is the ability to swap heroes on the fly.  Just hit a key on the keyboard and choose from a list of your available characters.  So if a certain battle calls for more strength or brute force, you might witch to The Hulk.  Perhaps a ranged battle calls for The Punisher.  I mostly played through as Wolverine, opting for the speedier and balanced attacks while Mike stuck with Iron Man.

After beating up on generic thugs, tossing cars, and generally collecting some random loot, it was time to test our co-op tactics.  Once Mike and I partied up we hit up a boss battle against Magneto.  We we're told that co-op would scale in difficulty, but the maximum number of players in a party and instance of boss battles was still undecided.  The battle wasn't especially difficult, but it did have a few little things that kept it interesting - namely the boss's special abilities.

Overall, Marvel Heroes is a damn fun game and best of all it's going to be free to play.  It's obvious Gazillion is going to monetize the visual elements.  We've learned already of dozens of alternate costumes and Marvel has even given them the license to create their own costumes for the characters.

There's a closed beta for the game going on right now with an open beta coming sometime closer to launch, which should be next year on Windows PCs.  Watch the video interview below for more juicy details...and maybe a little Carly Rae Jepsen.