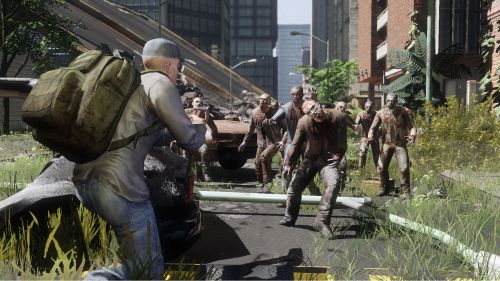 More video footage of the alpha phase of upcoming MMO/FPS zombie-thriller, War Z, has surfaced, showcasing some good use of defensive tactics to survive in an apocalyptic world. War Z is the first MMO, sandbox style zombie game to feature an open world, with no emphasis on a set storyline or even character classes.

It is the quintessential zombie survival game we’ve all dreamt of playing at one point or another. Developer Hammerpoint Interactive looks to emphasize online co-op gameplay and communication with War Z; aspects that zombie-type games should always share. Below are some videos showing off exactly what gamers have been looking for in pure, zombie survival title, sprinkled with sandbox qualities:

In the video, co-op players utilize communication and stealthy strategies to bypass unwary zombies and collect essential survival supplies, such as water and bandages. Killing zombies with a single shot to the head (standard tactic of all zombie lore) is the best way to take them down, but unconventional means, such as beating them down with a flashlight, will also do just fine (with the proper care and precaution).

For those instances where stealth doesn’t fit the bill, players will be able to build up barricades and fortifications using wooden boards found around the environments, as well as throw fire-red signal flares to distract the infected. Failure to survive on a consistent basis will penalize players by losing precious items, even those purchased in-game with real life money. No one said zombie survival would be pretty.

Set to be released sometime this fall on PC, gamers can now pre-order War Z on Hammerpoint Interactive’s official War Z website (no subscriptions for this game either; a one-time download purchase!). A closed beta will also be up and running soon, so don’t miss out on an opportunity to sign up and test the game before release!