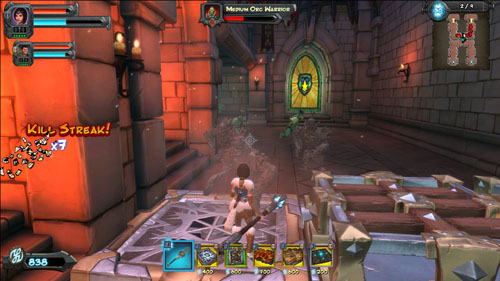 I’m a big fan of Orcs Must Die! and its co-op sequel, Orcs Must Die! 2 (henceforth OMD2). I had a blast with OMD2 when it came out two months ago (as can probably be seen with the 5 out of 5 I gave it), but since then the “other twos” (other big titles that end with the number two) have sucked my attention away from this humorous, action-driven tower defense game. This week, however, I had the excuse of diving back into the game with the recently released “booster pack,” Family Ties .

As announced last week, Family Ties comes with a whole slew of content of varying types. It comes with three new campaign levels (Triple Threat, Breakneck Triad, and Rush Hour) as well as three new endless levels (Breakneck Triad, Stairs of Doom, and Servant Entrance). As would be expected, all these levels are available in both single-player and 2-player co-op. Two new weapons are added to the arsenal (the Stone Staff and Teleportation Ring) as well as a new trinket (the Jar of Ghosts), all available to both the War Mage and the Sorceress. There is also a new unlockable skin for each class. DLC purchasers are also confronted with two new enemy types: the Hobgoblin Healers (which can heal enemy orcs) and the Ball and Chain (a huge female orc wielding an enormous mace). The last addition the DLC brings to the table is a new bonus skull reward - if players can complete a level without using any mana, they’ll receive an additional skull for their efforts. After playing through Family Ties , I have to say many of the additions make the game a slightly richer experience. I absolutely love the addition of the Stone Staff, as it suits my playstyle - run in and blast orcs in the face, and when overwhelmed I slam the staff into the ground, turning surrounding orcs into stone for a short amount of time. I also toyed around a bit with the Jar of Ghosts, which seemed to fill a nice gap in the trinkets (the active area-of-effect fear was certainly useful at times). The Hobgoblin Healers also called for a slightly different playstyle, as it’s very beneficial to search out and destroy them as early as possible before they fully heal a beefy orc. As for the levels, I felt they were well-laid out, just like the core game’s levels.

What I liked about this DLC is that all the additions were good additions, but none of them felt overly strong. I’ve certainly had the experience before in other games where DLC items made the game much easier, to the point that I almost felt as if I was being pressured into buying it. This wasn’t the case with Family Ties . This booster pack was clearly made for fans of the series who might just want a few more levels, or more variation in their game - which is exactly what I feel DLC should be.

If you’re a big fan of the OMD games and, like me, are just looking for an excuse to load up OMD2 again, this DLC should be just up your lane. If you found that you weren’t a big fan of the original game, know that Family Ties doesn’t change much, just adds on top of the existing core experience.

Family Ties is available now on Steam for $4.99. Players must own the original OMD2 in order to play it, and like the core game it supports 2-player online co-op.