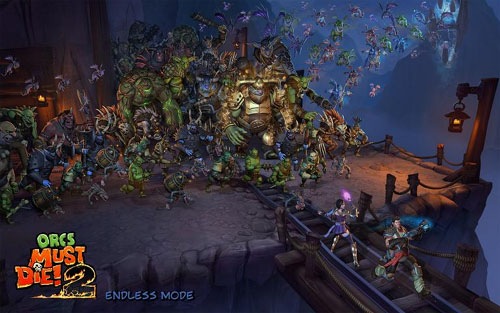 Robot Entertainment just announced that their upcoming action/tower defense hybrid sequel (Orcs Must Die! 2) will feature a brand new mode, available in both single-player and co-op. Entitled "Endless Mode," players will face unending waves of orcs with the game only ending when the players are defeated. The mode will be playable across ten different levels (5 campaign levels and 5 original, Endless-only levels).

Players will start each game of Endless Mode with a starter allowance to kick the party off. Every five waves a golden-armored ogre (named "Mr. Moneybags") will rampage his way through the level. If players can kill him before he leaves, they'll receive bonus gold. Furthermore, Endless Mode will also feature the same performance and bonus skull unlocks as in the campaign mode, so players can choose which mode they prefer for unlocking those sought-after skulls.