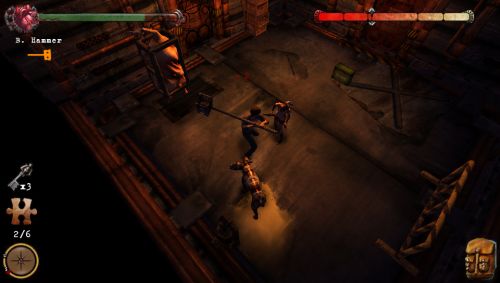 The Silent Hill games have traditionally been a survival horror adventure.  But the latest game in the series, launching around the time of the new Silent Hill movie, will diverge from familiar roads.  Silent Hill: Book of Memories is an Action / RPG for the PlayStation Vita with four player online co-op.  The isometric game plays a bit like a Diablo title, but still tries to retain some of the horror elements.  So how does the game scare the player if they power level themselves?  Breakable weapons at the most inopportune times.

So when you level up, you can add stat points and build your character however you want. You can equip things and sort of create the ideal build for your character. But then, weapons can break. So this isn’t like the “Gilded Dragon Sword” in Diablo that you want to hold onto. You know that I have a sweet sword, but you know it’s going to break. So do you hold onto it for the bosses, or Pyramid Head if I walk into a room with him? Or do I just use it and have an easy three rooms and now it’s gone.

So we’ve kind of – I hope – found the ideal way to balance building a character: they are getting stronger, getting more moves, more capable. But at the same time you’re not gonna become this empowered demigod and the whole game is your oyster.

The interview also gives some cooperative details about the game.  Your character can be used in single player or online and all your stats and items carry inbetween.  While the game only has 21 levels, the story is actually endless.  You won't see the entire plot in just one play through.  With that the endless aspect of the game has players diving deeper and deeper into more difficult dungeons.  In one instance a tester made it to level 380 in the game, so you know the Silent Hill: Book of Memories has some meat to it.

Silent Hill: Book of Memories is out on October 16th exclusively on the PlayStation Vita with four player online co-op.