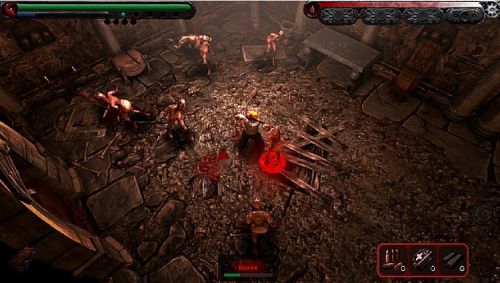 There were some very impressive games on display at the Konami booth. Metal Gear Rising: Revengance, the Lords of Shadow sequel, and even the Zone of the Enders HD collection caught my eye. Then there was Silent Hill: Book of Memories for the PlayStation Vita.

I played around with the dungeon crawler for a few minutes, killing an enemy here, finding a new weapon there. It's basically an isometric action RPG set in the Silent Hill universe. Horror does not translate to the small scale very well, and unless it's exquisitely crafted, it doesn't make a compelling action experience. Other than the title and some dingy settings, there was nothing "Silent Hill" about the game. Watch the following trailer and see what I mean.

Did you see those character classes at the :29 second mark? Let me spell them out for you: Preppy, Jock, Bookworm, Goth. Is this Silent Hill High School? I asked the fine gentleman demoing the game how the classes would be different, and he said that their inventory slots would change. I may have misunderstood, but that's not much variety.

The gameplay was wooden and decidedly old school. I walked around a rusted-out map, looking for keys or solving a minor puzzles to make forward progress. There wasn't much of a challenge. The lonely enemies were about as intimidating as a single straggling skeleton in Diablo 3. After unlocking a few doors, brandishing a few weapons (such as a knife and a board) I moved on to the new Metal Gear, which was awesome. Too bad there's no co-op to cover for that bad boy.

I wasn't impressed with Silent Hill: Book of Memories. At all. To be fair, I was playing by myself. I think the game will be much more enjoyable with more people. For some reason Konami had only the single player mode available. Shame.

Silent Hill: Book of Memories supports four player online co-op. It will launch on the PS Vita on October 31st.