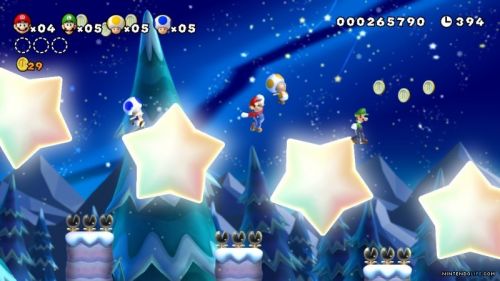 A New Super Mario Bros. Wii U has a trailer has surfaced, specifically tailored to showing off the co-op gameplay and visuals we’re looking for on the new Wii U platform.

Nintendo has seemingly mastered the catchy gameplay style and solid platforming mechanics that the New Super Mario Bros. series has to offer. If you’re a fan of the games, this sequel shouldn’t disappoint. Featuring the standard 4-player co-op mode we’ve come to love in these games, New Super Mario Bros. Wii U seemingly pulls off everything the series does best.

The most impressive aspect we’ve taken away from the trailer is the crisp, eye-pleasing graphics coming out of the new HD visuals on the Wii U system. “Stool Jumping” (jumping on a player’s head for a higher jump) also doesn’t seem to hinder the player being stepped on very much and the water levels look fantastic. We especially love how a Koopa Kid cannot decide on who he wants to attack due to all the players surrounding him and gets easily stomped; teamwork at its finest! We can’t wait to try out the game come this holiday season.

New Super Mario Bros. Wii U will be arriving on store shelves (along with a plethora of other sweet titles) on November 18th.