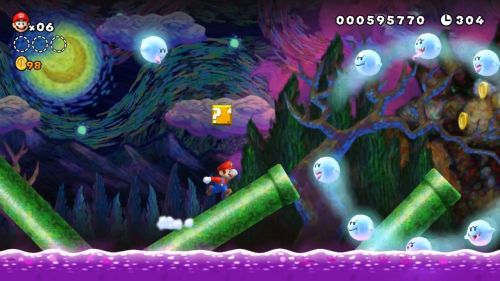 New Super Mario Bros. Wii U’s gameplay might look familiar on the outside, all with crisper looking graphics. However, there are plenty of new things to look forward to when on the new adventure to save Princess Toadstool. This game is already going to hold a number of modes to keep players interested in the new Mario side-scroller much longer after launch.

Before we get into the new modes, we wanted to mention that New Super Mario Bros. Wii U will be introducing a brand new character to the franchise. Known only as “Nabbit”, this little jerk likes to run around steal items from your Toad friends on the world map screen. To retrieve the stolen goods, you’ll have to give it quite the chase (apparently it's very quick on its feet). To award your efforts in capturing this little guy, he’s one of the few ways to obtain the valuable P-Acorn; the power-up that allows unlimited flight. Long story short: catch this speedy thief for valuable loot. We didn't even need to be told: Nabbit clearly looks like a troublemaker in need of a good ass-whooping.

The new modes that have been revealed by Nintendo recently sound pretty interesting so far and will make a great addition for long veterans of the franchise.  The first of them is being called “Challenge Mode”. This mode offers something many players have been looking for in a Mario side scroller for a very long time. In it, you’ll be given a specific task to complete in a stage, like using objects to keep you from touching the ground, for example. These challenges have then been broken down into four different categories for players to choose from: Coin Collection, Time Attack, 1-Up Rally, and Special, where you can choose any challenge within these gametypes. To make things even more interesting, a replay feature will be included to capture your challenge completions and share your epic feats with your friends. A Boost Mode challenge is also available in single player, but we won’t be focusing on it here.

Another mode that will be featured in New Super Mario Bros. Wii U is called, “Coin Battle”. In it, up to four players compete in racing through a level to collect as many coins as possible. The one who ends up with the most coins at the end wins; simple! Adding to the competitive side of things, players will be able to edit the coin layout in dedicated levels on Coin Battle Mode with their GamePads. Players then will be able to save these customized layouts for those who want to use the Wii Remotes as their controller.

These new modes should have some long life to the New Super Mario Bros. series long after the launch titles have laid the foundation of the Wii U. But if you’re looking for more Mario action in the future, check out the new DLC content that has already hit New Super Mario Bros. 2 in Japan (no word on when this will hit the US yet). Follow this link here to watch an informative, but somewhat long video on it. Cheers!