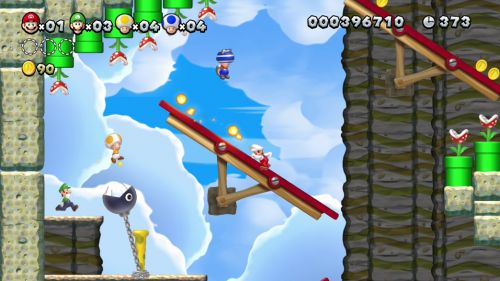 As one of Nintendo’s first games to ever run in 1080p, New Super Mario Bros. Wii U has everyone talking about the kind of graphics we’ve been waiting for from the company. No, there won’t be much difference in gameplay from the other New Super Mario games, but this one will definitely look the prettiest of them all.

It was suggested by many comments from Nintendo that the game (along with many of the other launch titles) would run at the old 720p, regardless of the Wii U’s full 1080p HD potential. But nothing can be farther from the truth, as Nintendo has stated recently on New Super Mario Bros. Wii U’s official site:

Experience Mario like never before... in full 1080p HD, only on the Wii U console! This is quite the contrast between what was being shown at previous events, like at E3 2012 and PAX, where 720p graphics took the HD’s place. This news of Mario going HD, however, doesn’t come as a super surprise to us, seeing as how Mario is the face of Nintendo and they need a strong, modern looking game to keep up with the evolving industry. Other games announced such as Toki Tori and Mass Effect 3 (also launch titles) will be releasing in 1080p display as well. If you aren’t that into Mario games, there’s a bunch more good looking, 1080p games out there to look into buying this holiday season.

New Super Mario Bros. Wii U will be available in retail on November 18th.

Update:  Perhaps not.  The text has since been removed from the website.  We are awaiting clarification from Nintendo.