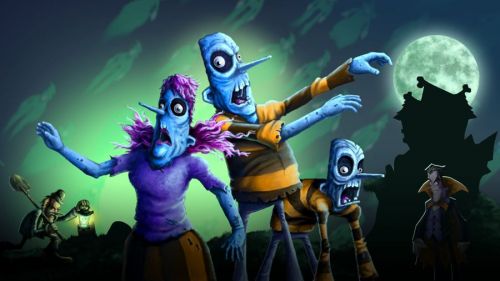 It's been almost a year since A World of Keflings has received new DLC. Developer Ninja Bee is going to scratch your family friendly, world-building, simulation itch with two new DLCs this month. The first, titled "Sugar, Spice, and Not So Nice," will feature a candy themed realm for your tiny Keflings to build up and explore. It will be available through the XBLA Marketplace on October 10th for 320 Microsoft Points ($4). You can see a video of the sweet new kingdom below.

I'm sure you caught the zombie teaser at the end of the video. We all know a game franchise hasn't really "made it" unless they've incorporated zombies into the mix. "The Curse of the Zombiesaurus" will arrive this month as well. The Keflings have been replaced by "Spooklings." Players will use their avatars to command the little monsters to gather bones, brimstone, and ectoplasm in order to build up a new undead land.

As you can see from the "Sugar, Spice, and Not So Nice" trailer, it looks like these new DLCs will have a little story to go along with the world building. No specific date or price has been given for "The Curse of the Zombiesaurus," but it should be available for a similar price before Halloween.

A World of Keflings supports two player local co-op and four player online co-op. It will go on sale for 400  Microsoft Points ($5) tomorrow.