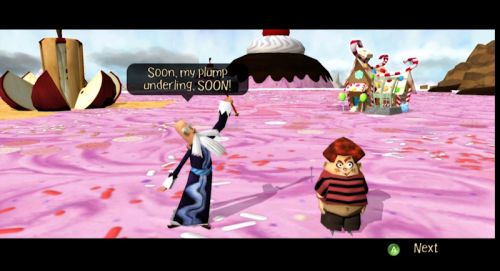 Back in January, A World of Keflings developer NinjaBee announced a contest to let fans choose which direction the XBLA game's next downloadable content package would take. Not surprisingly, the candy-themed selection 'Candy for Keflings' bested the rest. Four months later, the DLC has yet to arrive, but NinjaBee has kindly provided a status update and new images (like the one above) to tide us over.

According to the above video, 'Candy for Keflings' will include an all-new story featuring both good and bad guys, the humor the series is known for, all the candy visuals you could want, and some brand new mechanics to enhance the World of Keflings experience. Not mentioned but expected are additional Achievements as well. For more 'Candy for Keflings' development pics, check out PlayXBLA.

A World of Keflings is a charming, worry-free game in which players use their Xbox Live avatars to build a variety of things with the help of tiny, kickable Keflings. It sports some fine 2 player split-screen and online multiplayer - see our co-op review for more details. The full game costs 800 MS Points ($10). 'A Candy for Keflings' has no price or release date yet, but the previous DLC, 'It Came From Outer Space' rings up at 320 Points ($4).