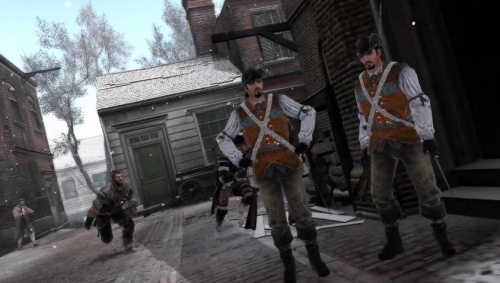 We're fast approaching the release date of Assassin's Creed 3,  the next game in the series which takes place during the American Revolutionary War.  After many, many rumors we finally got confirmation of  co-op for the game, though it's a separate mode called Wolfpack.  But confirmation was all we had and we haven't heard much else since.  Now with the October 30th release date just two weeks away, we've got a few more details to share - including a new multiplayer video.

First up is a hands on preview account from PlanetXbox 360.

Four assassins pick their team in co-op fashion and hit one of several levels, tracking targets that are highlighted on the corner of the screen. A circular tracking system appears on the bottom of the screen, letting you know which direction you need to head, and how close you get.

The goal of this mode is to score enough points to move onto the next stage, or in this case, Sequence. The more kills you make, the better chance you have of moving on. But there's more to it than that. See, earning a "basic kill", as it were, will net you 50 to 100 points (and don't forget to kick them in the head to finish them for extra). If you add extra flair, like coming off a wall, diving from above, or performing a "multi-kill" with your fellow teammates, the points go up, and you get that much closer to moving on to the next Sequence. There's a heavy reliance on working together, so stay in communication with your team and finish your targets accordingly.

The preview also goes on to say that each successive sequence gets harder and harder and the group he was with managed to get up to level 23.  Could be a nice mix of arcade like action with the stealthy takedown like gameplay.  Risk versus reward of trying not to spook the target but also take it down as fast as possible.