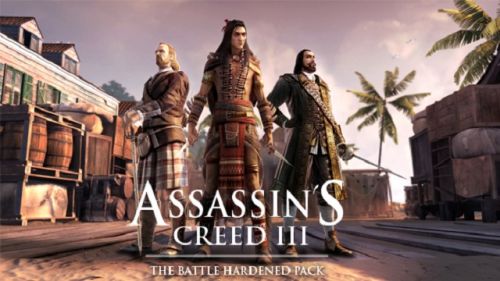 One of the fall's more anticipated AAA titles was the third, and final (for this story line, at least), entry in the Assassin's Creed series. At long last everything would be revealed/resolved. The whole sordid purpose behind the Templar's schemes. Why Desmond's ancestors were so important. Why Desmond has father issues. Why there was this whole futuristic doomsday plot in the first place. Ok, so not everything was clear. At least it ended, right? Even if you weren't all that into the game's story/premise, there was still plenty there to enjoy. Like the newly added "Wolfpack" co-op mode, which was one of the highlights for us. Good news arrives today as new maps and new playable characters will be available via the "Battle Hardened" DLC pack, slated to hit the Xbox tomorrow, Jan. 8. PS3 owner's can pick up the new content Wednesday, Jan. 9 and, last but not least, it will go up for PC players next Tuesday, Jan. 15.

With the way Assassin's Creed 3 multiplayer operates, the "Battle Hardened" DLC is actually good for Wolfpack and all the non-cooperative mulitplayer modes. If you want to jump into one of the new maps in the Manhunt or Wanted modes using the Coyote Man, then go right ahead. Without further ado, then, here's what you'll be getting if you pick this up:

- The Governor
- The Highlander
- The Coyote Man

While the characters don't have too great an impact of the game itself, as the skills you purchase are tied to your multiplayer profile, the new environments are definitely a welcome addition to the existing set of seven. The new DLC will set you back 800 MS Points, or $10 USD, which seems to be the going rate for map packs these days. If you have the Season Pass, of course, you'll be getting these for free.

At a time when there aren't a whole lot of co-op games coming out, this seems like as good a time as any to dive back into some of our favorites from last year.