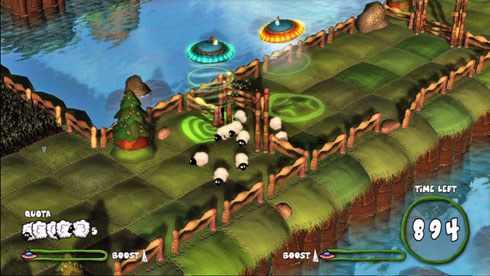 Way back in the middle of the summer, we gave you the first details about a quirky upcoming game called Flock.  Now even more information has been made available.  First of all, the game will be made available on XBLA, PSN, and PC sometime in January.  Second, a batch of screenshots are available, including the one shown above.  The game is described as a puzzler, and looks to be similar to Lemmings, with one important addition: co-op gameplay.  Two players online or local can team up to abduct all those sheep and take them to your base ship, the Mother Flocker.  (RIM SHOT HERE.)  No price has been revealed at this time.  Sheep + spaceships = I'm downloading the demo, for sure.  Hit the link below to see the rest of the screenshots for Flock.