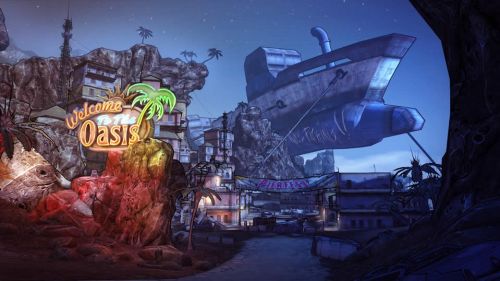 Borderlands 2 has been out for a little over a month, and the role playing shooter has already received two impressive add-ons. The first content drop added a new playable character, Gaige the Mechromancer. She was included as a free bonus with all pre-orders.

“Captain Scarlett and Her Pirate’s Booty” is the second piece of Borderlands 2 DLC. It’s the first campaign expansion included in the four part Borderlands 2 Season Pass. Since this is the first real piece of paid DLC, some of you may be on the fence about picking it up. I blasted through it in two nights and I’m going to tell you what’s good, and what’s not so good.

The story of “Captain Scarlett and Her Pirate’s Booty” stands on its own. Feel free to dive in wherever you are in the main campaign. There are no spoilers to ruin anything. Captain Scarlett herself is entertaining, but she’s not a strong as the central characters from other DLC’s. She's more of a Dr. Ned or Moxxi, as opposed to General Knoxx or Handsome Jack.

I'll make it easy on the fans. If you’re enjoying your Pandoran experience, you’ll enjoy this. All the game mechanics remain unchanged. You can access the town of Oasis via the Fast Travel system as soon as you download the content. The pirate-themed plot revolves around Captain Scarlett and a secret treasure (shocker). Pick up a mission, travel to a new area, shoot and loot, compare your new stuff to your old stuff, annoy your co-op partner because you’re taking too long to compare purple shotguns, sell the crap, and move on to the next mission. The DLC promises more XP, more Badass challenges, and more glorious guns. Packaged with some silly writing, it delivers.

The enemies and loot of “Captain Scarlett” scale with whoever is hosting the game. I hosted with level 11, 24, and 50 characters. The pirates scaled perfectly to my party's level 24 and 50 builds. Badass characters even scaled above the level 50 cap to remain challenging. Our duo of level 11’s got worked, though. The pirate enemies scaled down to around level 14 or 15, so make sure you’ve at least made it to level 14 before adventuring in Oasis. Unless you enjoy a good butt whooping. Then by all means, start that respawn train.

I live near the Salton Sea, so the desecrated tourist town of Oasis has a special place in my heart. Even though there’s a nautical pirate theme, the area is a dried up husk of a town. Dangerous sandworms attack anyone who ventures onto the cracked hardpan. The hulking remains of ocean freighters slouch precariously on rocky ledges.

The town of Oasis is just one of many locations in the new add-on. Most of the new zones have a junkyard or factory vibe. I'm a little disappointed that Gearbox went with yet another brown, rusted-out motif. There are some prettier areas, but they're used sparingly. You'll travel to these new lands in the new hovercraft vehicle. It's so Return of the Jedi it’s not even funny. The controls are as floaty as you’d expect them to be. It is a hovercraft, after all. One of the biggest improvements in the "Captain Scarlett" DLC is the inclusions of the Fast Travel network. There’s a Fast Travel point for each area. If you played “The Secret Armory of General Knoxx,” you know what a pain it was to travel between locales. Gearbox has wisely solved this problem. Like the main game, the vehicle portions play a very small role. Once you’ve discovered all the Fast Travel locations, you can skip driving completely.

The new cannon fodder is delightfully piratey. They are still basically midgets, psychos, bandits, and Badasses, but they’ve all been reworked well enough to feel like a whole new class of enemy. There are some nasty new creatures as well.  I’ll let you discover those on your own. The Hyperion Corporation’s robot Loaders also make an appearance. Not much new here. They’re still jerks. There are also two raid bosses who will DESTROY unprepared players. Bring friends.

My two biggest gripes with the DLC concern a lack of that oh-so-important thing we like to call "polish." The geometry of the landscape felt rough. I found myself hanging up on things like rocks and other junk in the environment far to often. It's not that bad, but the whole landscape just felt a little more jagged than Borderlands 2 proper. Then there's the final boss battle. The transition to the finale felt like some weird glitch. It doesn't break anything, but it felt rushed.

Overall, "Captain Scarlett and Her Pirate's Booty" is a fine expansion. It has something for everyone looking to extend their Borderlands 2 experience. The story fits well in Borderlands lore, the enemies are original enough, and there's a ton of new loot to collect.  Some players may be able to get through the main story in a night, but there's plenty of side missions and secret areas to explore. Add in the super powerful raid bosses and It's easily worth the price of admission. I can't wait for the next one.