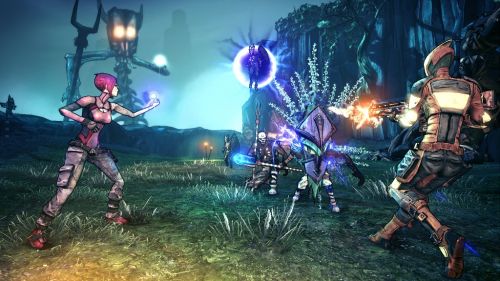 We are only a few days away from the third installment of Borderlands 2 DLC. "Sir Hammerlock's Big Game Hunt" will go live on January 15. Jason and I have played through the new adventure, and I really can't say anything more than that. I can say that if Gearbox decided to have a weekend event where they offered high powered weapons, you should probably take advantage of it. Oh, what a coincidence! Sir Hammerlock himself, or whoever happens to be running the @ECHOcasts Twitter feed, just announced a "Gear Up Weekend." What does that mean, exactly?

Right now it means shotguns. Lots and lots of shotguns. Apparently, the fine folks at Gearbox can control the loot drops. Today, our loot overlords have decided to distribute high powered shotguns to the masses. How do you get these superb shotties? Simply play the game online. The boom stick booty will continue to drop until tomorrow at 10:55 AM CST. CST? To hell with that noise. That's 11:55 AM EST and 8:55 AM PST for those of you who live in real time zones. Five minutes after they run out of shotguns they'll have a new gun type available. What will it be? You'll have to wait until tomorrow to find out. I'm going to guess sniper rifles, because I like randomly guessing things. In other Borderlands 2 news, you may have noticed that your favorite shotgun/amp shield combo has been nerfed to oblivion. You may have also noticed guns which spit out multiple projectiles at once aren't quite as good as what they once were, even before you equipped the Bee Shield. To make a long, math-filled story palatable for a Friday, let's just say some guns and abilities got super-nerfed, and Gearbox is working on it. Check out the Gearbox forum thread here.

While the PC version has been fixed, the consoles are still affected. You can see the PC patch notes below.

If the PC version has been fixed, it stands to reason that the console version will soon follow. Good. I'm sick of having to shoot things twice while Gunzerking.

Borderlands 2 supports two player local co-op, four player online co-op, and combo co-op. It is out now on the Xbox 360, PlayStation 3, and PC. "Sir Hammerlock's Big Game Hunt" will be available on January 15 for 800 MSP or $10. It is the third of four add-ons included in the Borderlands 2 Season Pass. We'll post our co-op impressions on launch day.